Chicken and Dumplings is a classic southern soup that’s nourishing and delicious, but usually full of refined flour. Try it paleo style using these recipes! You’ll use ingredients like sweet potatoes, cauliflower, tapioca, almond, and coconut flours to create your dumplings, and healthy bone broth for your soup.

1. Chicken, Veggies, and Dumplings
This recipe is bound to hit the spot any day of the week with its almond flour and egg dumplings and a creamy chicken broth and coconut milk base with kale and carrots for extra nutrition. Use bone broth to get the full benefits, and don’t skimp on those taste seasonings. 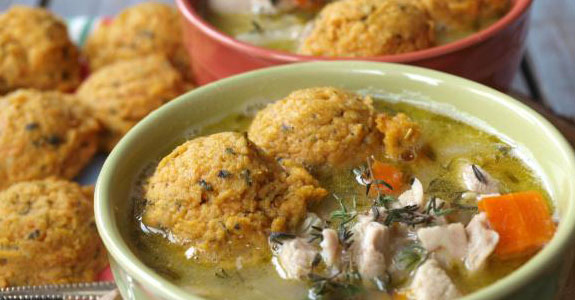 2. Chicken Stew and Sweet Potato Dumplings
This recipe might be my favorite so far. Just look at those delicious and nutritious sweet potato dumplings floating in that flavorful chicken stew with plenty of thyme. The dumplings are made with boiled and mashed sweet potatoes with coconut flour and eggs.

3. AIP Slow Cooker Chicken and Dumplings
I’m convinced that the slow cooker is pretty much the best invention ever (maybe after running water and refrigeration) and since this soup looks amazing, I’m going to say you have to try it. It’s AIP friendly with bone broth, coconut milk, creamy delicious chicken, and healthy veggies.

5. Chicken and Dumpling Casserole
There’s something about this recipe making my mouth water. Maybe it’s the fat, thick, golden-brown dumplings soaking up the broth. Maybe it’s the glazy-looking carrots and chicken. You’ll need to replace the corn starch with arrowroot for the casserole, but the rest of this recipe is completely paleo and completely awesome. 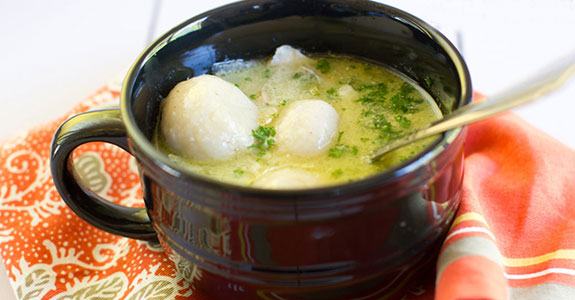 6. Paleo Chicken and Dumplings
This classic recipe for southern-style chicken and dumplings has a broth made with chicken thighs, poultry seasoning, onion, celery ribs, parsley, and milk of choice (I’d choose coconut for this type of recipe) with tapioca and blanched almond dumplings that will satisfy your craving.

7. Cauliflower Dumplings With Creamy Chicken Soup
These dumplings are made from cauliflower instead of only using grain-free “flours” like almond or coconut. Cooking half the cauliflower in with the broth and using an immersion blender helps make the soup extra creamy without using any dairy or even coconut milk.

8. Crumbly Paleo Chicken and Dumplings Casserole
This recipe is sort of a cross between chicken and dumplings and chicken pot pie, with the dumpling dough crumbled and spread across the top so it begins to soak up the delicious brothy flavors. Because it’s a casserole rather than a soup, this dish is thicker and heartier than others.

9. Perfect Winter Chicken and Dumplings
Ideal for a chilly day and packed with onion, garlic, celery, carrots, peas, and yummy tapioca flour dumplings, this recipe wants for nothing. It has it all! And so will you when you make it happen for dinner. 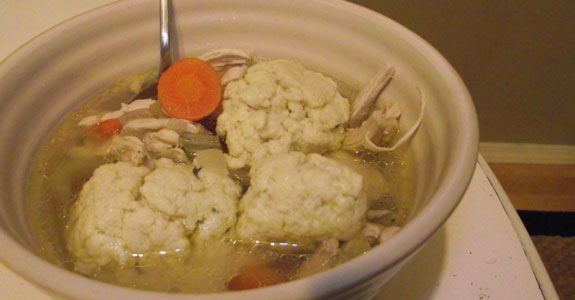 10. Chicken and Double Dumplings
I’m calling this recipe Double Dumplings because it features a rich and nourishing chicken soup with two kinds of dumplings: almond flour based, and coconut flour based. You can use one or the other, or cut both dumpling recipes in half and do some of each!

11. Easy Paleo Chicken and Dumplings
This recipe includes the process for making homemade bone broth from chicken backs, so it’s the perfect starter recipe if you’re new to paleo—or even just new to making bone broth. The dumplings are made from almond and tapioca flours in this recipe.