Commercial cereals are definitely a no-go on Paleo because they’re loaded with things that aren’t Paleo friendly, like wheat and other grains, and a host of artificial ingredients and unnatural flavors and dyes. Getting back in touch with a more primal way of starting your day can make a big difference in how you feel, and can kickstart your morning so you feel great, alert, and ready to take on the day. 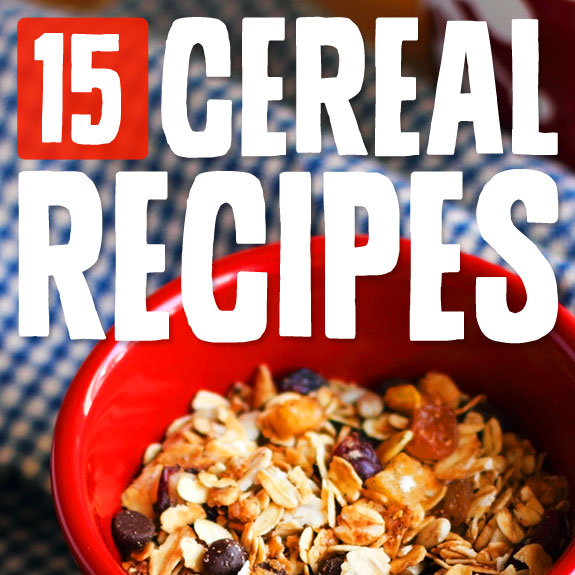 This paleo cereal is homemade and a perfect substitution for the store-bought varieties. Rich in chocolate and almonds, a small serving is very filling. Instead of rolling the dough into balls, which can take a bit of time, it can also be rolled out between two pieces of parchment paper and cut into thin squares. The cereal is best served with cold almond or coconut milk. 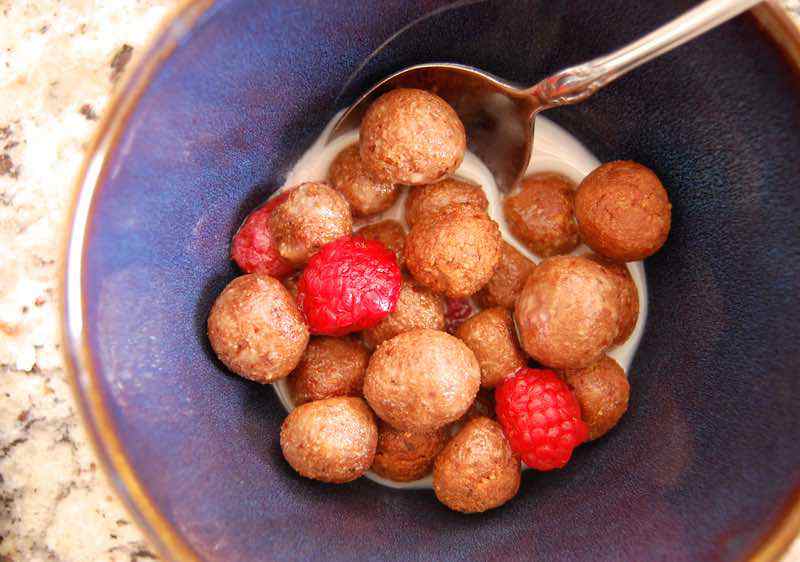 2. Line a baking sheet with parchment paper or a Silpat. Take a small pinch of dough and roll it between your fingers to form a small bite-size ball. Repeat for remaining dough. Bake for 15- 20 minutes until cooked through. Remove from the oven and allow to cool for 15 minutes. Serve with cold almond milk. 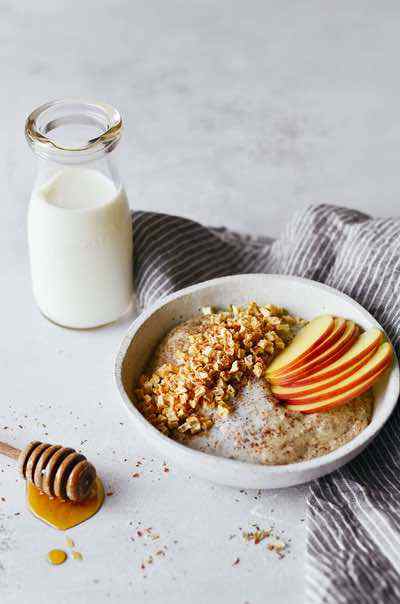 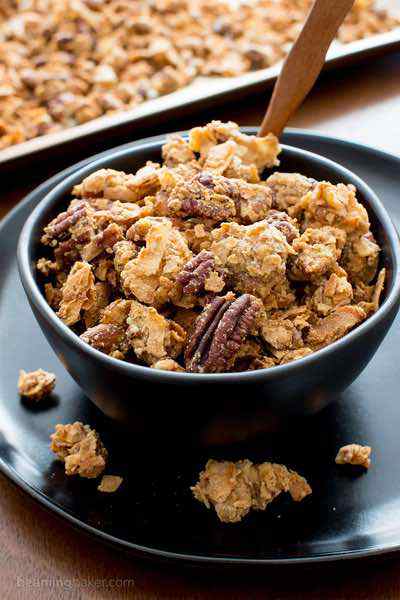 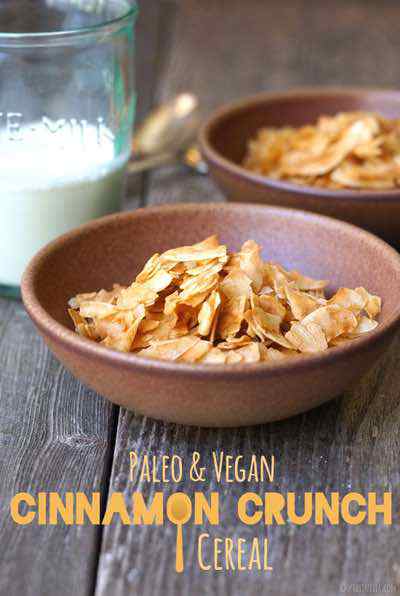 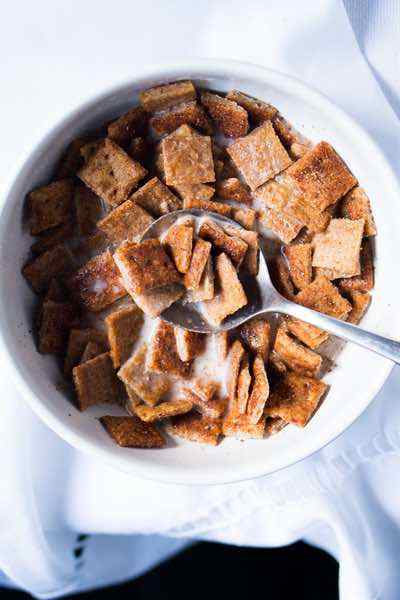 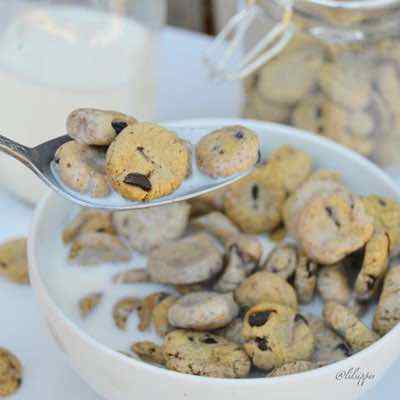 Cinnamon Faux-st Crunch
Here’s a Paleo twist to Cinnamon Toast Crunch, but unlike the brand name cereal your body won’t have to suffer through things like whole grain wheat, refined sugar, industrial grade salt, and additives like maltodextrin and BHT (butylated hydroxytoluene, used to preserve fat content). Instead, you’ll be getting nutritious ingredients like flax seed, hemp seed, real cinnamon, and coconut oil. You don’t have to worry about how it was made, how long ago it was made, or what sort of questionable ingredients it contains.

Paleo Chocolate Cereal
If Cocoa Puffs or Cocoa Pebbles used to be your cereal of choice, this chocolatey Paleo cereal may be your best bet as a substitute. The reason this recipe works so well is that it comes out in the familiar round shape, so it feels like you’re eating cocoa balls which makes it fun instead of looking like a health food. It’s made with almonds and coconut flour, which is blended up into a sort of dough which you then roll into a ball and bake. This may seem like a lot of work just for a cereal, but you can make up a big batch for the week and just store the extra in an airtight container.

Flint Chips Cereal
This recipe likes to point out the fact that The Flintstones have been endorsing things like Fruity Pebbles and Cocoa Pebbles for years, but these cereals do not accurately represent what was being eaten in the Stone Age. Instead they offer an eclectic mix of apples, coconut, cinnamon, chocolate, and nuts for a flavor overload without the use of rice, tons of sugar, and partially hydrogenated oils you’ll find in cereals sold on store shelves. The artificial colors used in these cereals is reason enough to look elsewhere for sustenance, not to mention all of the synthetic vitamins they pump into these cereals to make them seem healthy. Get your vitamins from real food sources, the way early man did.

Tropical Paleo Cereal
This is a tropical themed breakfast that is made into a cereal by the use of coconut milk. It incorporates four distinct tastes into one bowl, with kiwi, banana, mango, and pineapple all working together. When eating Paleo you’ll soon notice that fruit takes a backseat to vegetables and meat, but it’s still good to get a daily portion of fruit into your system because of all the good things they contain, namely antioxidants and fiber. The coconut milk adds some healthy fat to the equation, and you’ll be fueled through the morning with this.

Cinnamon Apple Creamed (Hot) Cereal
For cold mornings when you want to feel warm and happy on the inside there’s nothing like a hot cereal. This recipe gives you a nice creamy cereal without the use of any dairy. They’ve opted for almond milk instead, which is going to lend a nice flavor while being well tolerated by the body. It also uses coconut milk, so it’s going to have a nice thick creaminess to it as well as a yummy flavor. The cinnamon apple combo is a tried and tested breakfast winner.

Coconut Muesli
Muesli would get the ax on Paleo because of all the grains it contains. Here’s a Paleo friendly muesli recipe that you can enjoy as your new daily breakfast, or use on those occasions when you don’t have a lot of time. There aren’t any oats being used, and this relies on almonds, walnuts, coconut flakes, chocolate, and raisins to get the job done. They say you can add whey protein to it to help with the protein content, and this will be a judgement call on your part as it hits a Paleo grey area.

Paleo Breakfast Cereal
This cereal resembles a bowlful of items that the gatherers in the hunter/gatherer duo would have been able to scrounge up. That makes it a perfect Paleo style breakfast. It’s a mix of crunchy and nutty things like pecans, almonds, walnuts, and pistachios, combined with sweet and tart berries. To help it all taste better there’s a dab of raw honey, giving this just the right amount of sweetness. The nuts will provide you with energy and the berries will provide you with antioxidants so you should feel good all morning long.

Sweet Cinnamon Cereal
The neat thing about this recipe is that it can either be used as a cereal or as a graham cracker. It could make a great stand-in for Golden Grahams, and if you add a little chocolate to the bowl it could fill in for S’mores cereal. Almond flour and maple syrup get blended up into a dough which then gets rolled out and baked up into these crispy crackers. The only decision you’ll have to make after baking these up is what sort of milk you want to have with them. Almond or coconut usually works as a Paleo-friendly choice.

Apple Almond Coconut Cereal
This recipe is nice because there’s no measuring involved, which is totally the way Paleolithic man would have thrown things together. They use measurements like “handful” instead of the traditional cups and tablespoons. The ingredients are all very Paleo in nature, with apples, almonds, dates, and coconut all making an appearance. A little bit of time spent in the food processor and it’s good to go. They recommend blending it up a bit more if you’ll be feeding your little Paleo eaters with this.