I love cauliflower. I love it mashed. I love it roasted. I love it raw. I love how versatile it is and I think it’s pretty cute too, as far as veggies go. So there’s no surprise that I love Paleo dishes that use cauliflower, like this recipe for slow-cooked cauliflower chicken chowder. 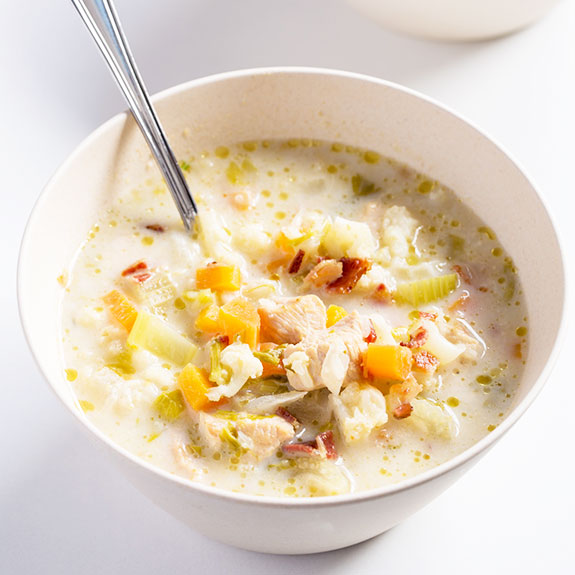 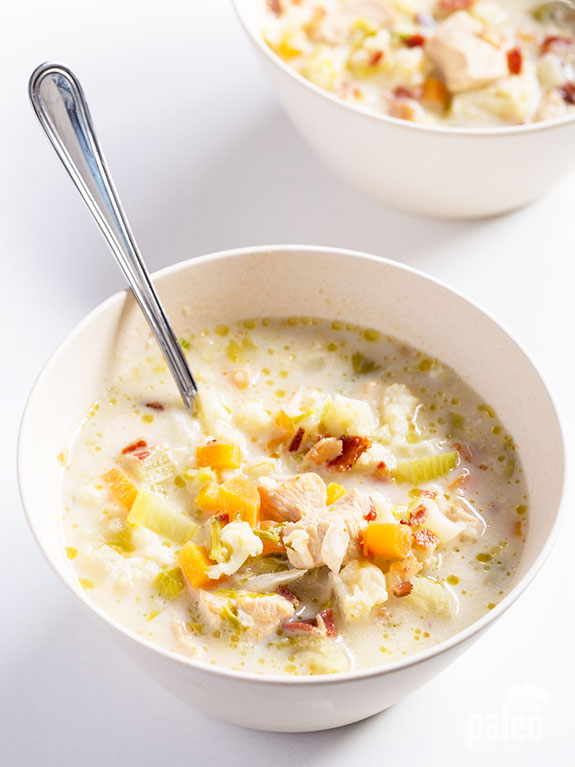 You’ve probably never had a chowder with cauliflower. In fact, if you’ve had chowder, you’ve almost certainly had it with potatoes. Just like when I make mashed cauliflower, the cauliflower in this recipe is a stand-in for the much more carbohydrate-laden potato. The texture is almost identical and with all the other warm and yummy flavors in this chowder, you certainly can’t taste the difference.

Another substitution that makes this chowder more Paleo-friendly than your everyday run-of-the-mill chowders is that many regular chowders use cream and often a wheat-based thickener. Since we stay away from both dairy and wheat ingredients on the Paleo diet, this recipe chucks those and instead uses arrowroot as a thickener and a bit of coconut milk to make the chowder a little creamy. 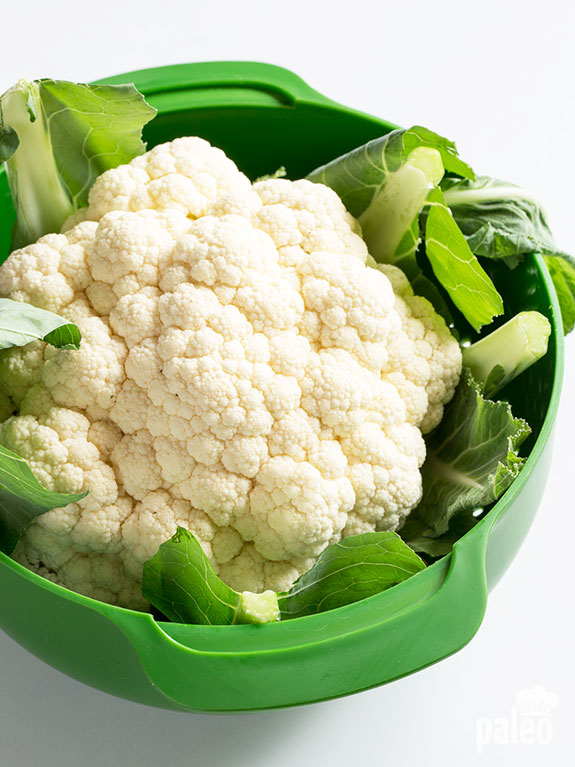 The arrowroot is a starchy and ancient root vegetable, common in native South American diets for centuries. I think it actually thickens better than wheat flour does and it has less taste, so you never get that funky gummy wheat taste. It’s a great substitute – one that I would use even if I weren’t a Paleo eater. 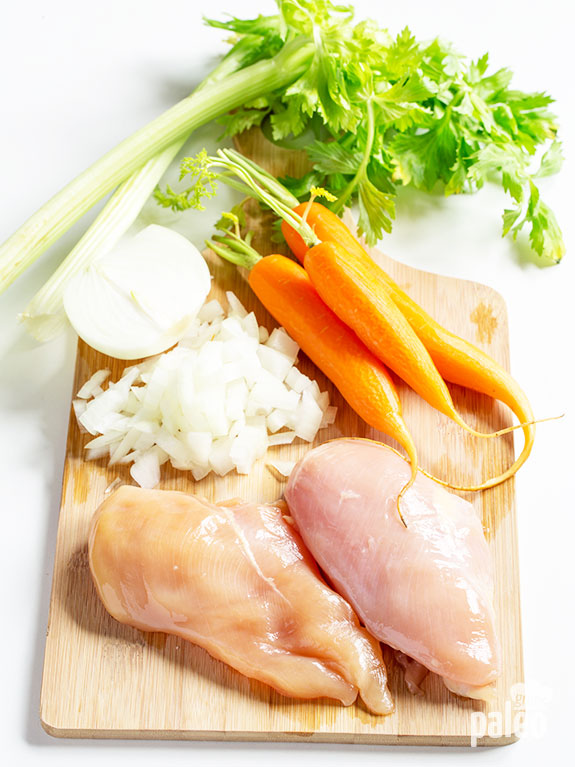 This recipe is full of good-for-you ingredients, as well. The chicken will give you tons of protein to keep you satisfied longer and the other veggies – celery, carrots, and onion – give the chowder the familiar chicken-based soup flavor we all crave now and then. Plus, with the cauliflower, this chowder has great fiber content. 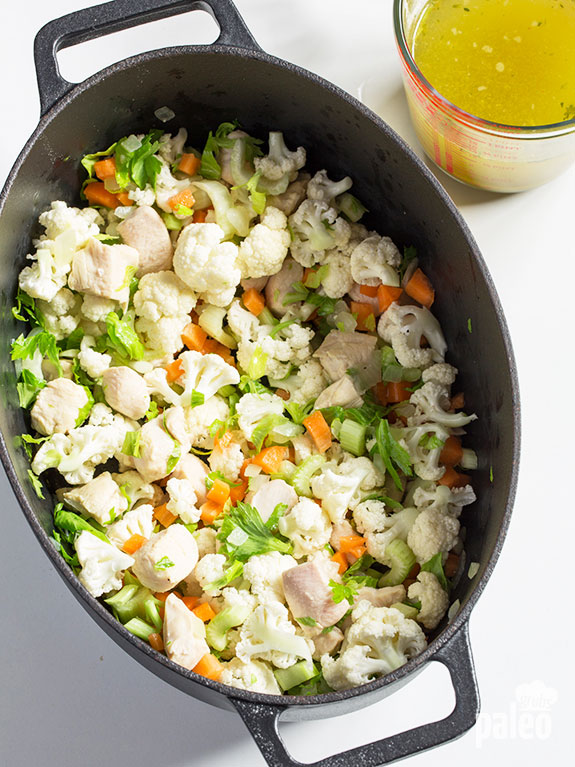 Chowders tend to make me think of snowy winter nights, maybe because they are generally thicker and more packed with chunks of good food than regular soups tend to be. In fact, chowders, in my opinion, toe the line with becoming stews. They are my favorite “in between” version of soup for the season.

And what chowder is complete without bacon?! I like to get mine extra crispy and then, after it is cool, crumble or chop it up into pieces – a few of those pieces always seem to go missing and end up in my mouth somehow! Then I sprinkle it on top and try to get a bit of the salty, savory, crunchy bacon in every bite. Not only does it add great flavor, but it gives you another texture to enjoy in your chowder. 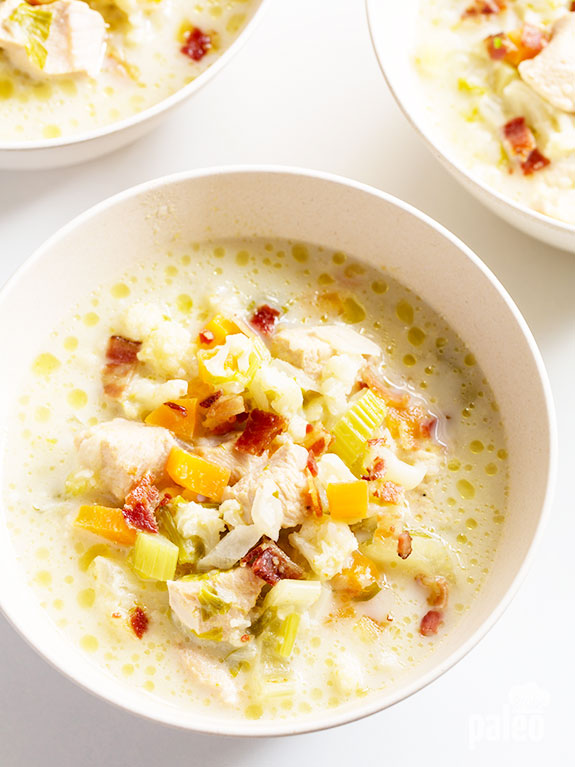 This recipe is great any day of the week, but since it takes a while to cook, I usually make it on the weekends and either enjoy it with a few friends or save some for the week ahead. Everyone loves a bowl of warm, hearty soup this time of year and this one – packed with so much good food and outstanding flavors – makes it a great choice. And, of course, it means I get to use my favorite vegetable – cauliflower!

( Make this next: Whole Cauliflower Braised in Tomato Sauce )