Essentially, this recipe offers all of the good substance of a burrito without the tortilla wrapping. The ingredients are prepared on their own, and then everything is brought together when plating the dish. Sweet potatoes provide a starchy base instead of rice and beans. A simple salsa and a side of avocado add zest and creaminess as toppings. 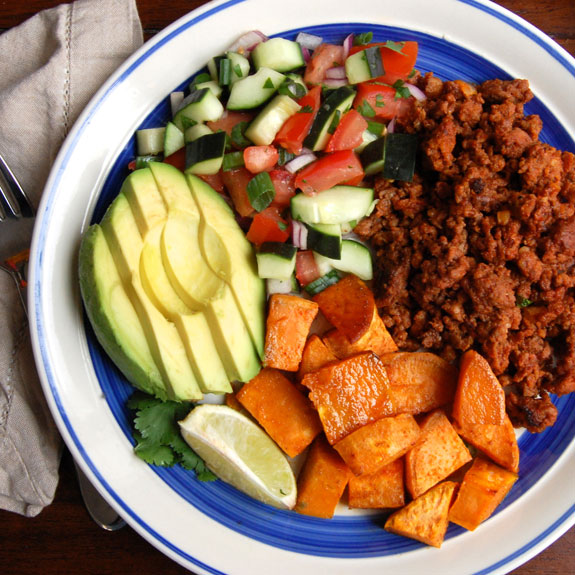 This burrito bowl (or plate actually) is inspired by the things you can order at fast food Mexican restaurants, except everything in this is Paleo. It is also budget-friendly; I made a big batch at the beginning of the week and then ate it for lunch for the next couple of days. My favorite part is the sweet potato roasted with paprika and cumin as the base of the bowl – it adds a lot more flavor than rice would.

For making this recipe it’s all about multitasking, and preparing one part while another is cooking. I like to start with the salsa so that the flavors have time to meld together, and then move on to the beef and sweet potato. The salsa is mainly composed of diced tomatoes and cucumbers, tossed with cilantro and a bit of lime juice. I prepare this first and then put it in the refrigerator while the rest of the ingredients are cooking.

For the burrito meat, I use ground beef but pork would also work. The beef is cooked with ground coriander, cumin, and paprika for seasoning, a combination that will be repeated throughout the dish with the sweet potatoes. Once the beef starts cooking, peel and chop the sweet potatoes. After the diced tomatoes are added to the beef it needs to simmer on low heat for almost half an hour, so this is a good time to roast the sweet potatoes as well. 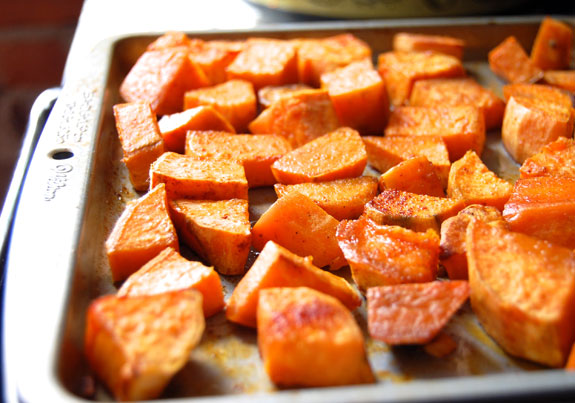 Toss the potatoes with some olive oil, again using ground coriander, cumin, and paprika to season. The avocado is simply chopped and served alongside the other ingredients, but if you feel like whipping together guacamole that would also taste great. Drizzle the diced avocado with lime juice to prevent it from browning. 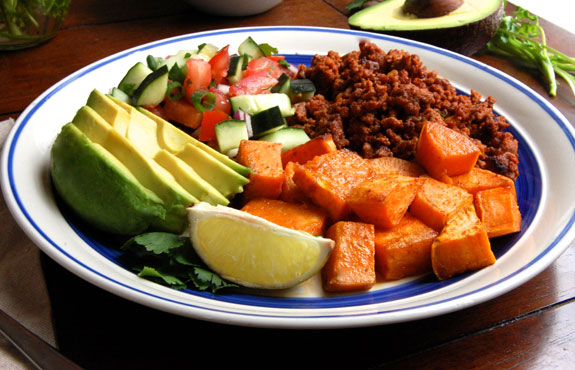 To assemble, you obviously don’t have to lay everything out separately like in the photo. Instead I usually put the sweet potatoes as the first layer, and then add the meat, salsa, and lastly the avocado. Mix everything together in a messy heap and enjoy. And if you are feeling ambitious and just can’t have a burrito without a wrapping, you could always make Paleo tortillas.