Bruschetta is something that you can have on Paleo, but you’ll either want to use a Paleo-friendly bread, or replace the bread with another item that tastes good with bruschetta toppings. In these recipes they’re being really creative and making bruschetta out of everything from sweet potatoes to chicken and steak. You end up getting all of the familiar flavor, but without worrying what it’s going to do to your diet. 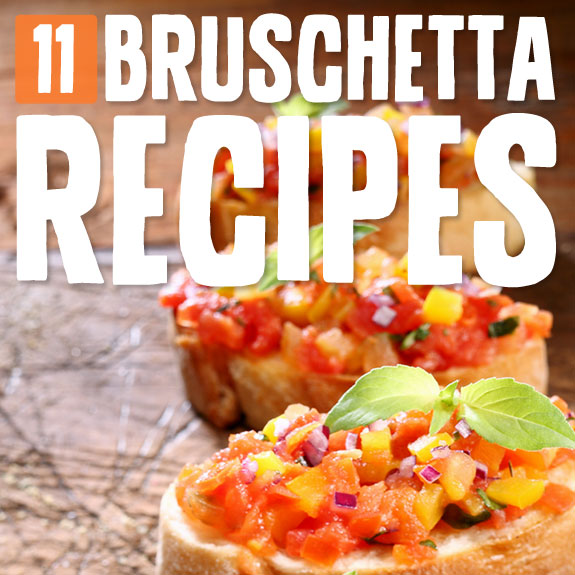 1. Balsamic Bruschetta Chicken
Here’s a bruschetta made with chicken instead of bread, so you don’t have to worry if it’s grain-free or not. The bruschetta mix itself is made with balsamic vinegar, tomatoes, garlic, basil, lemon juice, and olive oil, a pretty classic recipe. It adds plenty of flavor to the chicken, and also helps to keep it moist. There’s really no trick to this recipe, it’s just an example of expertly chosen ingredients paired with the right vehicle to get the job done. It’s a quick and delicious chicken recipe you can have again and again and not tire of it. 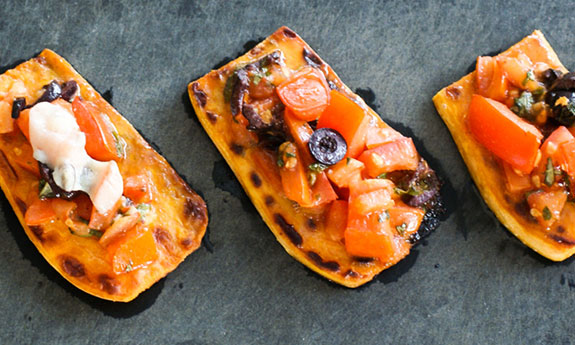 2. Mary’s Sweet Potato Bruschetta
Mary has decided to use sweet potatoes as the foundation for this bruschetta and it’s a great idea because sweet potato adds antioxidants and fiber that even a Paleo bread can’t match. Plus the way she has you slicing the sweet potato it flat out looks good and makes for the perfect vessel to hold all of those yummy toppings. These include tomatoes, basil, and olives and you have the choice of using parmesan if you’re allowing yourself to have it. Some Paleo followers allow for hard cheeses like parmesan, other stick to a strict rule of no cheese.

3. Striped Bass, ‘Bruschetta’ & Spinach
Bass gets the bruschetta treatment in this recipe, and it really is brought down to its bare essentials. She’s using tomatoes and basil only for the bruschetta, which is a good idea considering the delicate flavor of the fish. Keeping it simple is always smart because it makes it easier to exert quality control over the ingredients. She’s serving this up along with spinach, so you have a complete Paleo meal with healthy fats, phytonutrients, protein, fiber, and more, which is what makes eating Paleo so delicious and effortlessly healthy.

4. Bruschetta Steak (or Chicken)
They’re letting you choose what you want to serve your bruschetta on, either a steak or a chicken breast. Bruschetta steak is a reliable way to make sure that your steak has plenty of flavor without overshadowing its natural goodness. If you like to see an ingredients list that is uncluttered, check out this recipe. They’re only using what they need to get the job done, nothing more, and nothing less. For the bruschetta-esque part of the recipe they are using tomatoes, tomatoes, garlic, basil, olive oil, and balsamic vinegar, a pretty standard grouping, and serving it over a nicely grilled steak. Easy, clean, and delicious!

5. Paleo Bruschetta
This bruschetta recipe focuses on the toppings and they leave it up to your what you want to serve it on. As shown they’re putting the mix on top of slices of hard salami, a great Paleo choice, but you could also use slices of cucumbers or bell pepper boats, as they recommend. They’ve really gone all out with this mixture, using tomatoes, onion, garlic, and olive oil, as well as balsamic vinegar which shows up in many bruschetta recipes. But they’ve also added some Italian parsley to it for a bit more flavor. We love that their suggestions for how to serve this, and you’re sure to come out a winner no matter what you choose. 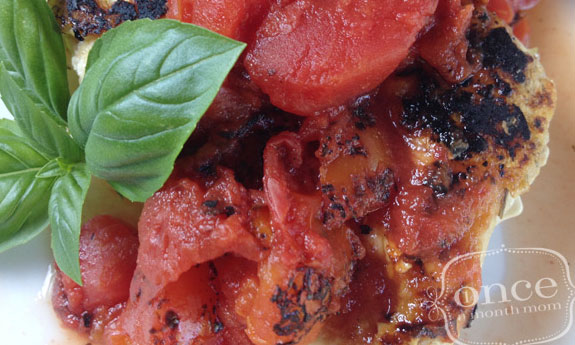 Photo: Once a Month Meals

6. Paleo Bruschetta Chicken
Here’s another bruschetta recipe that uses chicken instead of bread, and does so with delicious results. The mixture of ingredients they’re using includes basil, oregano, and garlic as the main flavor boosters. There’s also fire-roasted diced tomatoes which are really going to add some pizazz to this. The great part is that it’s labeled Paleo, and lives up to its title with all Paleo approved ingredients, right down to the chicken breast. Be sure to opt for organic chicken whenever you’re buying chicken on the Paleo diet. It makes a huge difference compared to conventionally raised chicken.

7. Paleo Bruschetta with Grilled Zucchini
Grilled zucchini stands in for the bread on this one and is a great choice because it gives you a serving of vegetables rather than just being a filler. Even though Paleo breads get rid of the grains, they still don’t really add much in the way of nutrition. This is a bruschetta recipe that veers off the beaten path, and gives you some extra tastes and textures. They’ve added avocado, so not only does it bring it’s green color to the dish, it also adds healthy fat, fiber, and potassium to this already healthy creation.

8. Pasta to Paleo Bruschetta Chicken
We had to include this Paleo bruschetta chicken recipe because of the way they’re cooking it up. It shows you just how easy it can be to cook a Paleo meal. Rather than cut everything up into little bits, they’ve left things in bigger pieces. This may or may not have been an intentional way to show how our early ancestors would have eaten their food. The cherry tomatoes are kept whole, the onions are cut into bigger pieces, and the chicken is simply baked in the oven. Even with the same ingredients as other bruschetta recipes, it comes out different because of the way it’s prepared.

9. Vidalia Onion Bruschetta
When vidalia onions are in season, there’s no better choice of bruschetta out there. The onion serves as the bread here, forming the base of the bruschetta. Normally it would be too overpowering, but vidalia onions are sweet and delicious, so it works well here. The toppings he’s chosen are pretty typical of a Paleo bruschetta, but he’s added parmesan cheese, which some Paleo followers will use, and others will exclude. Aside from that it’s your basic tomato, basil, olive oil, and balsamic vinegar, but don’t forget it all starts with the onion. 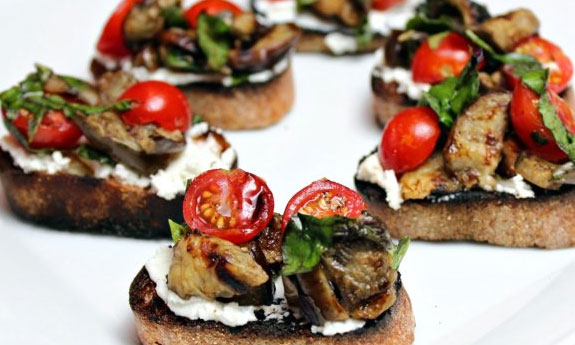 10. Grilled Eggplant Bruschetta
Eggplant makes a great addition to your bruschetta and it will provide its own unique flavor in conjunction with the other items used. They’re saying to use a French baguette, but you’ll want to sub in a Paleo bread instead if you follow it to the letter. You could also borrow from other recipes on this page and serve up the same toppings but on a sweet potato, or a chicken breast. In addition to the eggplant you’ll find the usual tomatoes, basil, and balsamic vinegar, just be sure to leave off the ricotta cheese unless you’re doing a bit of dairy with your Paleo, in that case make sure it’s organic.

11. Balsamic Roasted Red Pepper Bruschetta
Here’s a bruschetta made with roasted red peppers and balsamic flavor. You’ll want to sub in a Paleo friendly bread for the whole wheat baguette they’re using. Most any Paleo bread will work in this, you just have to make sure that it’s using almond flour or coconut flour instead of all-purpose flour, as this will take care of any grain concerns and will allow you to have this the traditional way. The use of roasted red peppers really sets this apart from the others, and is sure to become one of your favorite ways to make bruschetta, no matter how long you stay on the Paleo diet plan.