This sweet and gluten-free bread pudding is a rich addition to any meal. Studded with raisins and cinnamon, it can be enjoyed for brunch or dessert alike. Instead of a sugary sauce, this Paleo bread pudding is naturally sweetened with honey, vanilla, and coconut cream. 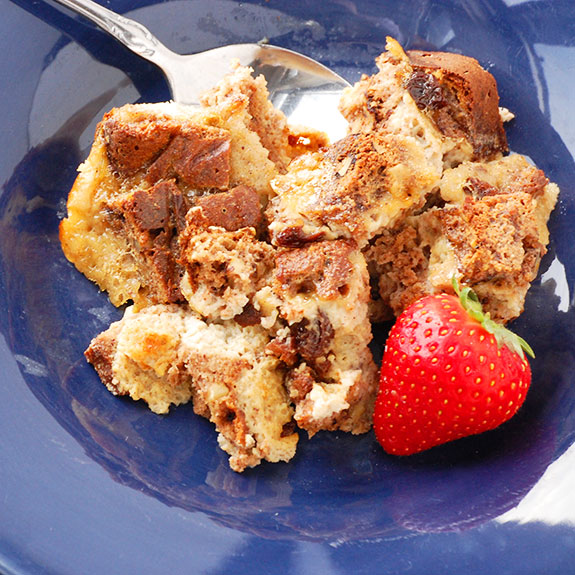 Before you start this recipe, you should note that you need a loaf of Paleo bread. You could use the PaleoGrubs recipe for sandwich bread, or even a loaf of Paleo banana bread if you want the extra flavor. (I actually used banana nut bread for the photos.) If you are making a new loaf of bread (versus using up an old loaf) I suggest baking it at least a day ahead of time so that it has enough time to cool.

Raisins are added to the loaf of bread for a bit of texture, but can easily be omitted or substituted for berries. I used a Dutch oven to make the bread pudding but a regular baking pan would also do just fine. 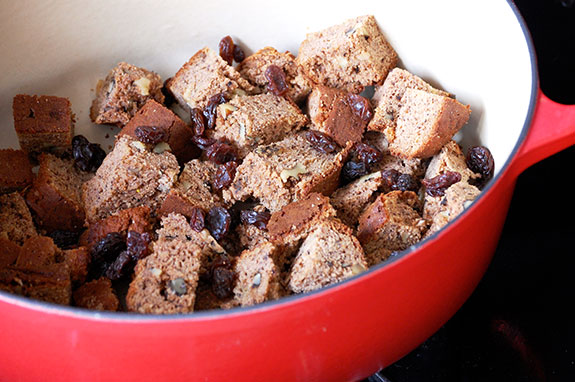 The pudding ingredients should be whisked together thoroughly until they are completely combined. This includes eggs, honey, coconut oil, cinnamon, nutmeg, and vanilla extract. It is best to slowly drizzle in the melted coconut oil so that it does not scramble the eggs. The coconut cream also included in the pudding can be skimmed from the top of a can of chilled coconut milk. When refrigerated overnight, a can of coconut milk will solidify into a sort of cream that is great for recipes such as this. 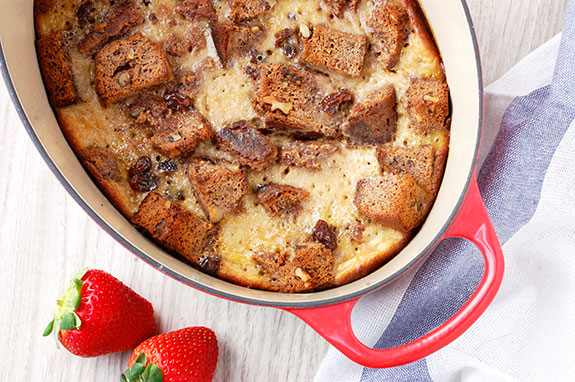 The pudding mixture is then poured over the cubed bread. If needed, give the cubes a little dunk in the pudding to soak them. Bake the pudding for almost an hour, or until it is set in the center. Let the pudding rest briefly before dishing it out on plates to serve.

The bread pudding is moist enough to serve on its own, but I think serving it with coconut whipped cream or even coconut ice cream would be absolutely delicious. A side of fresh berries would also nicely balance the decadent dish.