Blondies may be known as the slightly tamer version of rich, chocolaty brownies, but that doesn’t mean they’re any less delicious. And these paleo recipes are anything but tame! Try grain-free blondies using ingredients like avocado or sweet potato, almond butter and coconut butter, and more. They’re packed with add-ins like cranberries and nuts and chocolate chips, and you’ll love every single one of these recipes.

1. Caramel Chocolate Chip Paleo Blondies
These decadent blondies are made with a combination of cashew butter and blanched almond flour, creating the fudgiest, most delicious blondie base you can imagine. They’re studded with chocolate chips and coated with homemade coconut caramel for a simple but delicious treat. 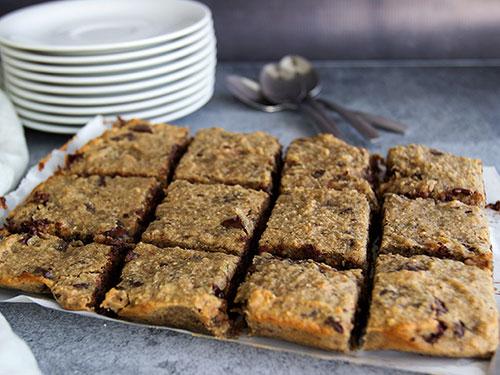 2. Coconut Flour Chocolate Chunk Vegan Blondies
What about a blondie that’s suitable for your vegan friends, too? Try this one with rich, melty chocolate chunks, coconut and tapioca flours, chia seeds, coconut sugar, maple syrup, and vanilla. The recipe calls for walnuts but you can leave them out if you don’t like nuts in your blondies.

3. Cranberry White Chocolate Macadamia Nut Blondies
With a base of almond and coconut flours, these holiday-reminiscent blondies have a deliciously sweet flavor from the white chocolate chunks, and bursts of tart dried cranberries (I recommend unsweetened ones). maple syrup and vanilla top of the flavors with a warm sweetness.

4. Vegan Carrot Cake Blondies
These little treats are the best of both worlds when you can’t decide what kind of dessert you’re craving. They’re made with avocado, carrot puree (baby food works!), cinnamon, pecans, coconut sugar, and other fabulous flavors. With flax as the binder, they’re egg free!

5. Vegan Chocolate Chunk Blondies
This unique combination of flours includes almond meal, tapioca starch, and potato starch for a fudgy blondie with an amazing flavor. They’re sweetened with a combination of coconut sugar and stevia for a treat that’s lower in sugar and flavored with vanilla. 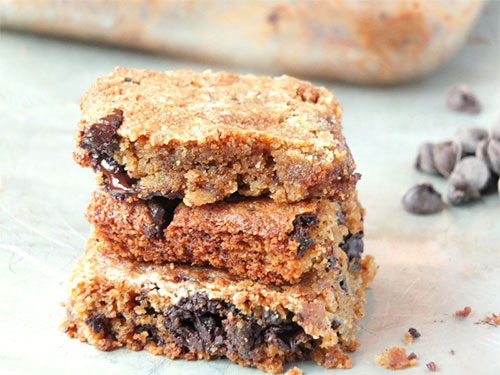 6. Simple Blondies
With only seven ingredients, this super simple blondies recipe might be the one you make when you just want to throw something easy together. You’ll need almond butter, coconut sugar, applesauce, coconut oil, almond flour, chopped dark chocolate, and baking soda.

7. Healthy Four Ingredient Flourless Apple Pie Blondies
A hybrid between apple pie and blondies, this easy treat is fudgy and sweet, and it only takes a few minutes to make. You’ll need unsweetened applesauce, almond or cashew butter (I’d use cashew), coconut flour, maple syrup, and apple pie spice. If you want, sprinkle extra coconut sugar on top for a crust.

8. Paleo Turtle Blondies
Inspired by a popular fancy candy, these turtle blondies feature a homemade caramel sauce with chopped pecans on top. They’re buttery, and the caramel sauce is made with coconut milk and a touch of molasses for a deeper and more complex flavor.

9. Paleo Banana Coconut Blondies
To make this recipe fully paleo, you’ll need to make a small adjustment by replacing the oat flour with almond flour. It’s a small amount, so no big deal. These blondies have a gentle coconut flavor with a simply and melty homemade chocolate drizzle on top. 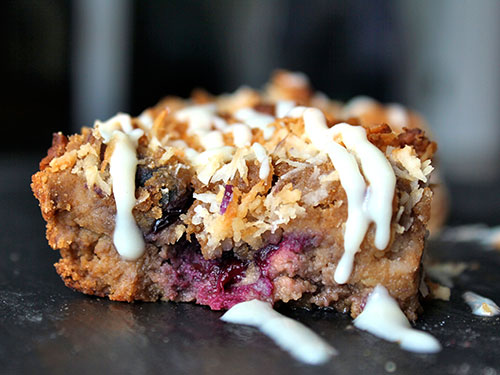 10. Blueberry Banana Coconut Blondies
This flavor combination is one you don’t see often, but it’s so delicious! These blondies are vegan, made with flax eggs, ripe banana, coconut butter, and more. Stevia is the main sweetener along with fresh blueberries and vanilla extract.

11. Paleo Pumpkin Blondies
The almond butter base of these blondies ensures a fudgy texture despite the fluffy nature of baked pumpkin puree. Sweetened with maple syrup and coconut sugar, they are perfectly comforting for a fall or winter treat with hints of vanilla and cinnamon.

12. Paleo Coconut Chocolate Blondies
These high-protein blondies are made with a full cup of raw almond butter and unsweetened shredded coconut, along with eggs and extra yolks. The combination of coconut sugar and shredded coconut adds a tropical flair that goes so well with chocolate chunks!

13. Almond Blondie
Made with a bade of almond butter and almond flour, these blondies have a yummy almond flavor with dark chocolate chunks, honey, and vanilla. If you want to boost the almond, try adding a half teaspoon of almond extract or replacing the vanilla. 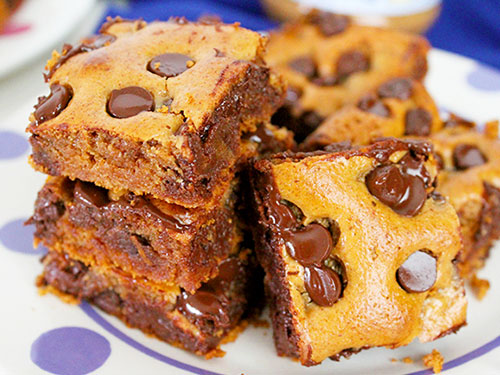 14. Almond Butter and Honey Blondies
I love the simplicity of these blondies and their delicate honey flavor, which reminds me of spring. That’s the only sweetener you need! Almond butter serves to replace the flour while vanilla extract and chocolate chips create a delicious classic blondie flavor.

15. Flourless Chocolate Chip Blondies
Would you look at the fudgy texture of these guys? This is a blondie I’d really love to get my hands on, and it has a unique combination of ingredients that makes it both delicious and semi-healthy. You’ll need avocado, almond butter, instant coffee power (optional but boosts the flavors) and homemade chocolate, recipe included.

16. Paleo Chocolate Chip Blondies
The coconut oil in this recipe is a fabulous source of healthy fats and really compliments the chocolate and vanilla flavors and the coconut sugar sweetness. With an almond butter base, this is a rich and dense blondie that’s high in protein.

17. Simple Paleo Chocolate Chip Blondies
The almond butter, coconut sugar, and almond flour ratios in this recipe are perfect to create a deliciously dense and fudgy blondie smeared with chunks of melty dark chocolate and swirly with vanilla extract. With only a half cup of almond butter, this recipe also won’t break the bank. 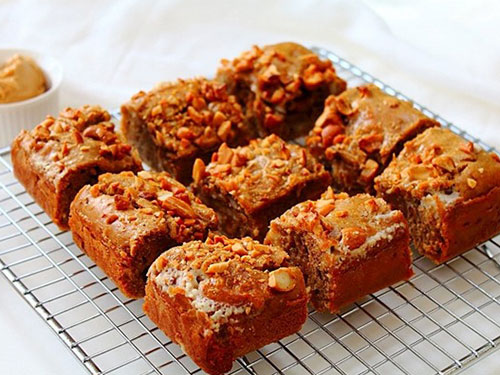 18. Cashew Butter Coconut Chip Blondies
The ingredients to these blondies are simple, but the flavor is decadent and complex thanks to cashew butter, Medjool dates, ghee, Himalayan rock salt, and the scrapings of a fresh vanilla pod. You’ll make your own coconut chips with coconut butter and coconut oil.

19. Raw Chocolate Chip Maca Blondies
Raw Blondies? Yes! It can be done, and this recipe does is perfectly with raw cashews and almonds, maca powder (it adds a caramel-like flavor while also being an energy-boosting superfood), cinnamon, vanilla, dates, and chocolate chips.

20. The Best Coconut Flour Chocolate Chunk Bars
Sweetened with your choice of honey, maple syrup, or agave nectar (my choice would be maple syrup) these chocolate chunk bars need coconut flour as their only flour. If you want, you can dress them up by adding coconut flakes to the batter—otherwise chocolate chunks alone will get the job done.

21. Salted Caramel Blondies
With butter, honey, almond butter, maple syrup, and coconut milk, these delicious vanilla salted caramel blondies have a flavor unlike any recipe I’ve shared so far. They’re drizzled and swirled with an easy homemade raw caramel sauce that is so tasty. 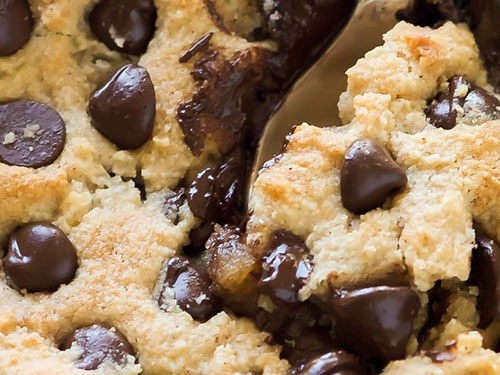 Photo: With Salt and Wit

22. Paleo Deep Dish Salted Caramel Chocolate Chip Blondies
This skillet-baked blondie is the epitome of fudgy, and the flavors are so perfect that you’ll have to be careful not to eat half the thing all by yourself! The homemade caramel is easy with coconut oil, almond butter, and maple syrup, and the blondie features hints of cinnamon.

23. Paleo Chocolate Chip Cookie Sticks
Made cookie style in bars, these delicious blondies are made with almond flour, coconut palm sugar, almond butter, butter or coconut oil, vanilla, dark chocolate chips, and fine sea salt. They’re easy and the recipe makes plenty, so you can freeze them for a treat later.

25. Pumpkin Blueberry Blondies With Raspberry Honey Frosting
Now we’re getting fancy! These blondies have several different flavors working together for a tasty treat that’s layered with a gorgeous pink raspberry frosting. You’ll need to break out the freeze-dried fruit for this one, because it’s the key to that intense flavor. 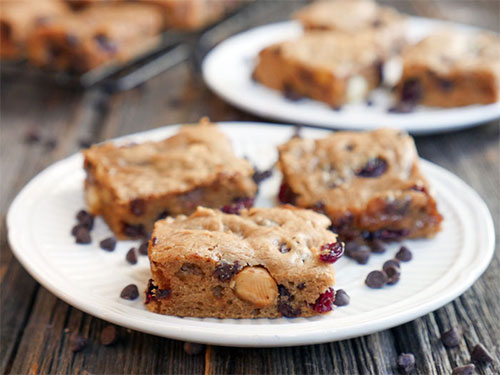 26. Cashew Butter Blondies
Studded with dried cranberries, macadamia nuts, and chocolate chips, these awesome cashew-butter-based blondies are fudgy and simple to make, because they just have a handful of ingredients. Maple is your only sweetener and vanilla extract adds a sophisticated flavor.

27. Flourless Pumpkin Chia Seed Blondies
The base of these blondies is ripe plantain and pumpkin puree, making for a flourless blondie that’s bound with chia seeds and sweetened with coconut sugar—vegan, too! Season them with cinnamon, cloves, ginger, and nutmeg for an autumn treat.

28. Moist and Chocolatey Sweet Potato Blondies
With coconut oil, maple syrup, and sweet potato puree, these blondies certainly have an unusual flavor—but it’s delicious! They remind me a bit of pumpkin blondies, but this recipe doesn’t use the typical pumpkin pie spice, so chocolate shines through!

29. Crazy Good Paleo Blondies
Finally, I’ll share a blondie recipe that’s absolutely loaded with dried cherries, chopped pecans, unsweetened coconut flakes, and (of course) chocolate chips. The flavors of vanilla and maple are decadent, with a base of almond and arrowroot flours. 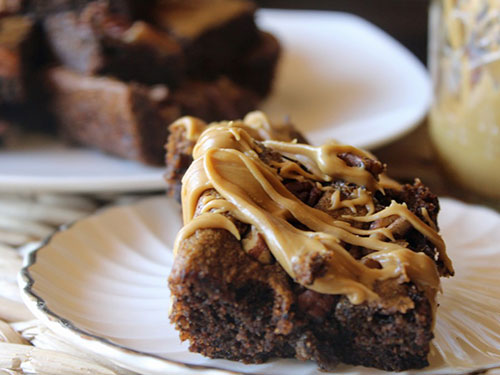 Photo: The Family That Heals Together

30. 5 Minute Flourless Blender Blondies
I’m a huge fan of blender recipes, because they’re so much easier to clean up! I just throw some hot, soapy water into my Vitamix and blend it clean, after making these awesome blender blondies with walnuts, maple syrup, eggs, maple syrup, pecans, vanilla, and salt.