Nothing quite tastes like BBQ sauce except for BBQ sauce, so you might have felt a little disappointed if you thought you’d have to give it up. But like many food items, it’s not about giving them up while on Paleo but about finding a way to have them using Paleo approved ingredients. These barbecue sauces don’t use any refined sugar or corn syrup, but bring all the flavor your mouth can tolerate. Cook up big batches of them so you’ll have enough to last you awhile for your efforts. 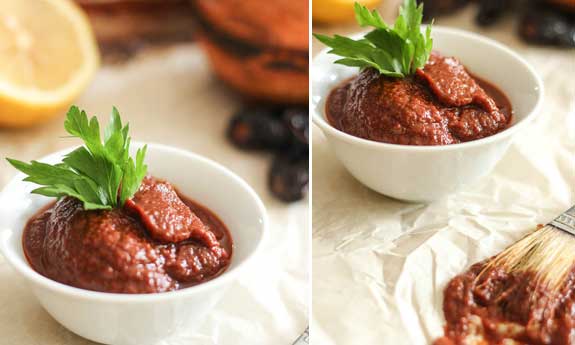 1. Smoky Hot BBQ Sauce
Some BBQ sauces are hot, others are smoky, but this one tries to be both, and that’s a very good thing. This is one of our favorite BBQ sauce recipes, and you simply can’t go wrong by stocking a supply of it for any meat dish that might need it. You’ll be eating a good amount of meat on Paleo as part of the meat and veggie heavy meal plans it produces. Putting a dab of this sauce on the meat will make it taste that much better in most instances. It has plenty of ingredients, and they’re all Paleo friendly.

2. Peach BBQ Sauce
Add the fresh and fruity taste of peaches to your barbecue sauce and you’ll be surprised at what a difference it can make. It plays really well with the other flavors, while making it perfect for items like chicken or pork, as well as ribs, which is what they’re recommend it goes on. Three slices of bacon mean that it’s going to have a nice smoky and savory flavor to it, so you don’t have to worry about it coming out too fruity tasting. The ripe peaches give it just the right consistency.

3. Maple BBQ Sauce
It’s not uncommon for barbecue sauce to have a maple flavor to it, because maple syrup is added to many brands. But the interesting thing is that it’s not real maple syrup being used in many cases, but rather artificial maple flavoring. Here they bring it back to basics and use actual maple syrup to give it maple flavor. Sounds simple enough, but apparently greed and profit motive make big corporations cut corners and produce sauces at a minimal expense so they can make the most money possible. It’s easy enough to whip this up once you have the required ingredients assembled.

4. Apricot Ginger BBQ Sauce
Apricots and ginger might not be the first thing when you think of barbecue sauce, but after you try this recipe you might have trouble getting them out of your head. They somehow work really well together when combined with tomatoes, honey, and apple cider vinegar to give this just the right BBQ flavor. It’s a way of starting with something you know you’ll like, and kicking the flavor up a notch by adding two distinct flavors in the apricot and ginger. It’s great on chicken, and can be used on ribs for a new taste sensation. 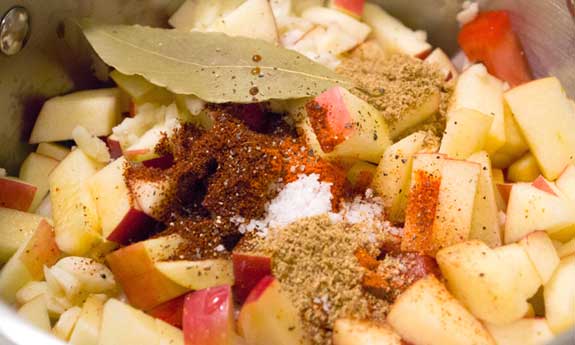 5. Homemade BBQ Sauce
Making your BBQ sauce at home is a fantastic idea. If you make a big enough batch of it, it even makes fiscal sense because you can make it for about the same cost as the mainstream stuff, but you’ll be getting a serious flavor upgrade for your time and effort. This recipe beckons you to put it on short ribs, and is making sure you’ll remember it by using plenty of spices and seasonings to get it right on. Try paprika, cayenne, and chili powder just to get things started. Honey is used for the sweetness, and apple cider vinegar for the tartness.

6. Smoky Tomato and Mango BBQ Sauce
Tomatoes and mangoes never tasted so good together than when mixed up for this barbeque sauce. They are taking a bit of a shortcut by using prepared ketchup, they’ve just made sure that it’s sugar free so that it’s only using tomatoes. You may also want to make sure that it’s organic so you’re getting a high quality brand. The shortcut doesn’t save you too much time really, because you’re still using over a dozen more ingredients in the form of seasonings to get the flavor spot on. There’s even a bit of hot sauce used so this will have a slight kick to it.

7. Cherry BBQ Sauce
Dark sweet cherries will give this sauce an awesome flavor, and cherries simply go well with a sauce like this, lending their flavor and also adding some nutrients to the mix. You don’t often equate a sauce with providing your body with sustenance, but there’s no reason why it can’t help contribute to the larger whole of your nutrition. This uses both maple syrup and molasses, so you know it’s packing the sweet stuff, which goes well with the cherries. The use of chipotle pepper will keep this on the BBQ side of the equation.

8. Potent Primal BBQ Sauce
This is labeled as potent, so if you don’t like spicy sauces, it’s best to move on to the next recipe. But if you seek out spicy sauces that get your taste buds to finally wake up, read on. The potency comes from ingredients like chipotle chili powder, fresh jalapenos, and spicy mustard. But don’t think that this is a one trick pony and it will only taste like heat, it also has wonderful items like garlic, tomatoes, and limes to make it taste fantastic. 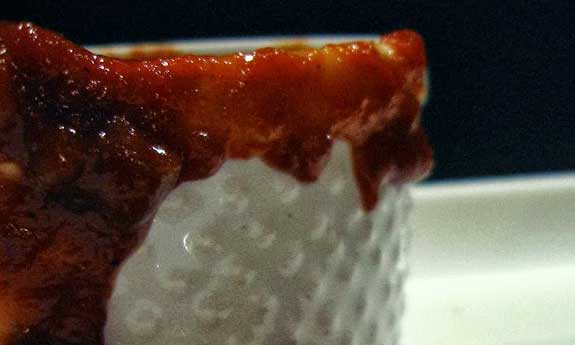 9. Sweet and Spicy Bourbon Barbecue Sauce
This is a classic flavor duo when it comes to BBQ sauce, and you can’t quite beat the combination of sweet and spicy. In this recipe the sweetness is derived from a cup of honey, which is plenty of sweet, and also gives it that nice consistency you expect from a barbecue sauce. The spicy aspect of this sauce comes from chili paste, which will bring with it a good amount of heat. Not so much that you’re crying when you eat it, but enough to make a statement. And since it has the sweet backing it up it’s a nice level.

10. Spicy Maple BBQ Sauce
Maple and spice go together nice, and when it comes to a barbecue sauce that’s truly finger licking good you can’t beat it. The maple flavoring comes from pure maple syrup, one source of sweet that is authorized Paleo. The spice is from cayenne, an old standby when it comes to adding spice to a sauce or dish. You’ll also get classic BBQ sauce flavors from the onion powder and garlic powder, and there is sea salt in this as well to help with the flavor.

11. Blackberry BBQ Sauce
You don’t often see blackberries being used in a barbeque sauce, and part of the joy of Paleo is that you get to try to creations and new flavor combinations that you may not have dreamed up in the past. Early man was not privy to being picky about what he ate, and had to make due with whatever came along or what he stumbled onto. That’s why it’s a good idea to eat a wide variety of foods, and to keep an open mind and try new things. This sauce is a good place to start, and will give you extra antioxidants from the blackberries.

12. Carolina Gold BBQ Sauce
This sauce doesn’t look like your typical BBQ sauce because it doesn’t have the classic dark brown reddish hue to it. Instead, it is a bit yellow, and in this case they’re calling it cold. Carolina Gold to be exact, and this is a version of barbecue sauce that you simply must try if you haven’t had it before. They’re using nitrate free bacon, yellow mustard, honey, and apple cider vinegar to give your taste buds a treat, without adding to your midsection in the process. This is another one where you’ll want to mix up a big batch so you have some leftover you can store. 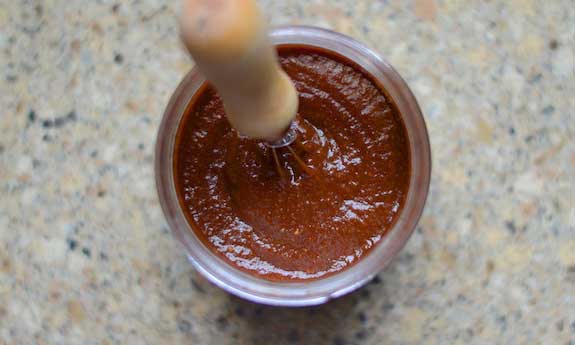 Photo: VA is for Hunter Gatherers

13. Brian’s Barbecue Sauce
Brian starts with a base of homemade ketchup, which is a pretty good idea since most of the commercial barbecue sauce does the same thing. The thing that makes this recipe really special is that he’s using molasses, so it’s going to give the sauce a thickness that you don’t often see in store bought varieties. Add a bit of liquid smoke, two types of chili powder, paprika, and a few other not-so-secret ingredients and you’ve got quite an awesome sauce on your hands, and your chin, and your fingers. Wear a bib and keep the napkins handy with this one.

14. Hickory BBQ Sauce
Liquid smoke is responsible for giving this its hickory flavor, and that makes it stand out when compared to other sauces on our list. This sauce might take a little longer to make than some of the others, but it’s worth it if you’re a BBQ sauce aficionado. You spend a bit of time cooking up the ingredients so their flavors can fully combine, and then you put the whole thing in the blender and blend it until you get the smooth texture of sauce. This could end up being your new favorite, so give it a try when you have a few spare hours.

15. Best Homemade Healthy BBQ Sauce
What’s fun about this sauce is they’ve spent a lot of time perfecting it, and are nice enough to show you how to make it. They’ve kept the goal of making a healthier sauce by reducing your intake of refined sugar and using organic ingredients when possible. Molasses gets the call along with raw honey to make this a sweet sauce. You’ll also find organic tomato sauce and tomato paste to give this a familiar taste and texture, as well as provide plenty of lycopene for your health. It contains ghee for extra buttery flavor, and the necessary seasonings to make it taste classic.

16. Quick and Easy BBQ Sauce
When you’re in a hurry and just want to have a sauce for dipping your chicken in, this is the sauce to crank out. It has just 8 ingredients, and the directions are pretty much mix them all together and eat. You might not feel like you worked hard enough to produce anything, but it actually does work to make a barbecue sauce that saves you from the junk they sell in the stores. This way you know you’re getting a quality sauce, but you don’t have to spend all afternoon making it.