Waking up with banana pancakes is one weekend tradition that you can continue on with even if you’ve started doing Paleo. Ordinary banana pancake recipes have you dumping white sugar and milk into the batter which is made from all-purpose flour, which is made from grains. When it’s all said and done the nutrition from the bananas is overshadowed by all of the junk your body doesn’t like to process. With the recipes below you’re getting a nutritious treat that you don’t have to feel bad about eating. 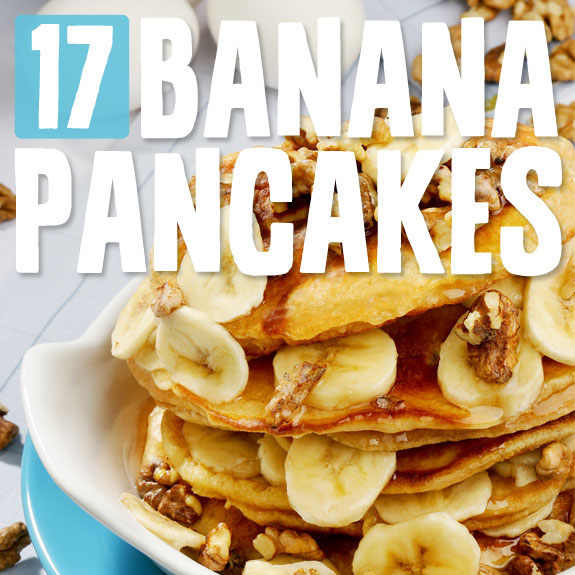 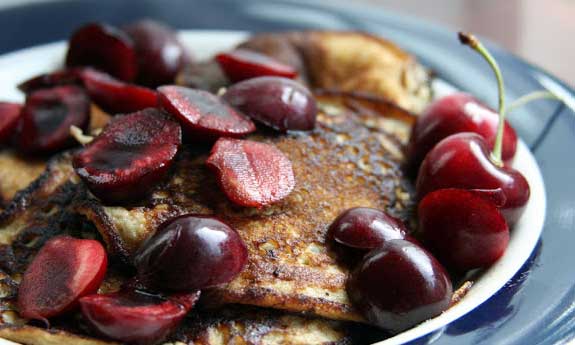 1. Primal Paleo Pancakes
Don’t be fooled by the cherries on top, these are really banana pancakes, they’re just using fresh fruit on top as a serving suggestion. Bananas get center stage on this recipe, which has 7 basic ingredients and you know it’s Paleo since it keeps things simple. Each ingredient serves a purpose here, and there’s one item that doesn’t show up in most pancake recipes: ginger. This will give them a unique flavor, and will also add to the healthiness of the recipe. Yes, on Paleo even pancakes come out as health food.

2. Banana Pancakes
We’ll start off with a pretty classic recipe so that you have something to use when you want a standard pancake with bananas in it. Even though this doesn’t have a lot of bells and whistles to it, it still manages to use coconut flour instead of ordinary flour, and there’s no milk or sugar used, so you’ll end up with some simple flavors all working together to simulate the pancake experience. They’re using mashed up bananas, which is why they recommend using really ripe ones so they’re easier to mash.

3. Banana Bread Pancakes
This is a fantastic recipe because it takes the yummy taste of banana bread and puts it into pancake form. You simply can’t go wrong with these if you love banana bread. The great part is that it looks like banana bread that’s been smooshed into a pancake. It’s the unique blend of spices and seasonings that they’re using that gives it that familiar taste, and of course like any good Paleo pancake recipe they’re using a suitable flour substitute, in this case almond flour to give it the heftiness you’d expect from banana bread. 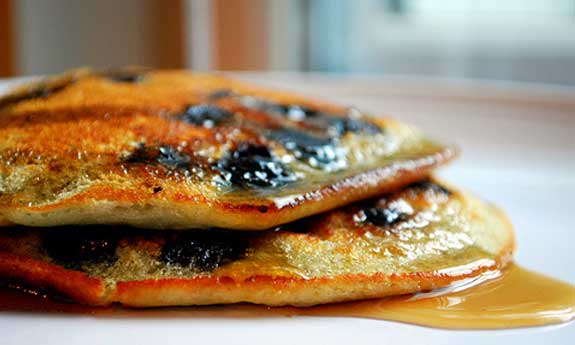 4. Paleo Blueberry Banana Pancakes
How can you make banana pancakes even better? Add blueberries to them! This is a recipe you’ll surely come back to if you’re a fan of blueberry pancakes. The two just work together, and aside from these two ingredients there are just three more in total. What’s interesting about these is that they’ve gotten rid of flour entirely, and they’re using almond butter to give the batter a batter-y feel to it. Sometimes you might be skeptical when cooking Paleo meals, but you just have to have faith that the cook or chef has gone before you and is vouching for the results. And trial and error was surely part of the Paleolithic lifestyle.

5. 2-Ingredient Paleo Pancake
If you’re used to tearing up your kitchen to make pancakes, you’ll appreciate being able to make them using just two ingredients. It’s easy enough to verify that a recipe lives up to its claim of having just two items in its ingredient list, and here we see that you’re using a banana and an egg blended together to form pancake batter. This is really bringing it down to its bare essentials, and you may never have thought you’d ever eat, or even enjoy, pancakes made with just a banana and an egg. But before you turn your nose up at it, try it and see what you think.

6. The Paleo Banana Pancakes Formula
This recipe provides a fantastic visual for what it takes to concoct perfect Paleo pancakes anytime you want them. You can print this off and keep it in your kitchen whenever you’re in the mood for simple banana pancakes that satisfy every time. She’s boiled it down to four basic ingredients, and the way it’s laid out you can almost memorize it so you don’t need to print it. Anytime you see a Paleo chef using coconut oil you know that they’re gunning for flavor, and that’s just what you’ll get with these fluffy banana pancakes. 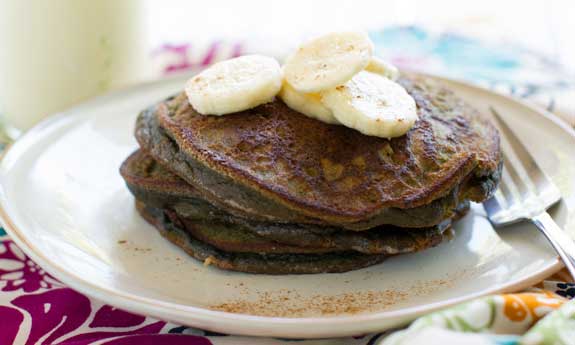 7. Paleo Banana Chocolate Pancakes
Chocolate seems to make everything taste better, and it’s not something you have to abstain from on Paleo, you just have to become a chocolate snob. You have to become too good for ordinary milk chocolate, as that is loaded with milk and sugar that you’re not supposed to have. Instead you go straight for cocoa powder or opt for dark chocolate so you can have a say of what’s in it. These pancakes use cocoa powder and sunbutter to give you that rich chocolate taste, and coconut flour to keep them Paleo, but also fluffy and light.

8. Baked Sweet Potato, Zucchini and Banana Pancakes
Sometimes a banana could use a little help from its veggie friends and sweet potatoes and zucchini are answering the call. The three might not sound like they go together well, especially if you’re of the notion that vegetables don’t belong in pancakes, but they blend together nicely and give these pancakes a heartiness you don’t typically see when you just use bananas. There will also be a more rich flavor to them, and more depth to them, which you’ll appreciate if you don’t really like your pancakes to be too sweet.

9. Banana Spice Pancakes
The trick to these banana pancakes is the packet of pumpkin spice they have you adding to it. This gives them the feel of pumpkin pie, which goes well with bananas, and you can instantly have a fall classic on your hands if you make them during the autumn season. These are great to make if you ever start to get bored with your usual banana pancakes. The other ingredients are all Paleo, and they even suggest using butter or coconut oil to cook them up on. Almond flour gets the nod as the white flour substitute so no grains were harmed in the making of these pancakes. 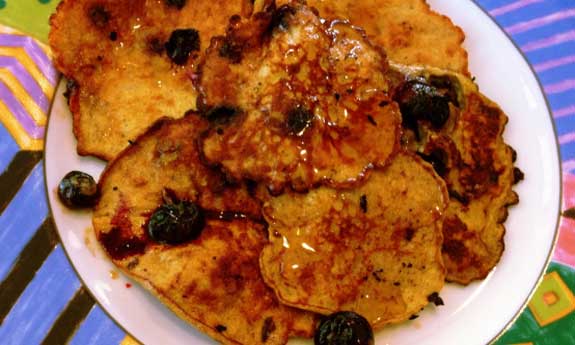 10. Banana Coconut Blueberry Pancakes
Usually when you see a Paleo recipe that has coconut in it, they’re referring to the use of coconut flour. But not this recipe, which is using unsweetened shredded coconut to enhance the flavor of these pancakes. There are also blueberries being used, so you’re getting three pretty strong flavors all vying for your attention in these. This is a recipe for those that like a lot going on with their taste buds, or for those that want to shake things up and are tired of the same old banana pancakes.

11. Chocolate Chip Banana Pancake
These banana pancakes get a nice dose of chocolate, but you’ll want to make sure that the chocolate chips you use are dark chocolate if you want to stay within the guidelines of Paleo. The rest of the ingredients all make the cut, including using the full-fat version of coconut milk. There’s no need to use reduced fat versions because these are healthy fats and the Paleo diet is all about getting a good dose of healthy fat each day. They are using almond flour to give these pancakes their form, which sidesteps the need for regular flour made with grains.

12. Paleo Banana Pancake
Here’s another great recipe that will have you doing a double take and thinking that it’s a traditional recipe. There’s a mix of both coconut flour and almond flour here, which always works nicely to replicate traditional flour. There’s also a strong attention being paid to the ingredients, including sea salt rather than ordinary table salt, and the suggestion to use ghee or coconut oil to fry these up in. Topping suggestions include maple syrup and fresh fruit, both allowed on Paleo, just make sure the maple syrup is pure and the fruit is organic. 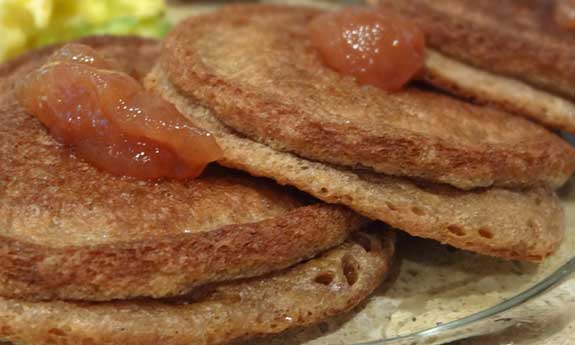 13. Almond Butter & Banana Pancakes
Here’s another recipe attempting to circumvent flour by using almond butter. It seems to be a pretty good gambit, and is great for those times when you happen to have almond butter and no almond flour or coconut flour in your kitchen. The other ingredients are stay pretty close to traditional ingredients found in banana pancakes, including bananas of course, cinnamon, vanilla, and baking soda. The finish product looks like banana pancakes and tastes amazing so add this to your regular pancake lineup.

14. Easy Banana Pancakes
We like easy. Easy is how caveman kept things, even if it was out of necessity. Why use 20 ingredients when you can use 10? Why use 10 if you can use 5? They get the total time on these down to ten minutes, so if you are in a hurry but still want a warm and tasty breakfast this has to be your go-to. Bananas, eggs, coconut flour, and a bit of cinnamon and you’re good to go. This can also become your regular banana pancake recipe, but you don’t have to tell your family that it only takes you 10 minutes to whip up.

15. Gluten Free Banana Pancakes
When looking for Paleo recipes you can also use gluten free recipes, but you’ll want to make sure that the other ingredients used are Paleo approved. Going Paleo means you’re going to be gluten-free, but going gluten-free doesn’t make you a Paleo eater. Kicking the grains is a big part of eating Paleo and it effectively wipes the gluten out of your life (one big reason why it’s a good diet for most that try it). They say the whipped cream is optional on this, and for us Paleo eaters we have to opt out of it, since it’s a dairy-free lifestyle. 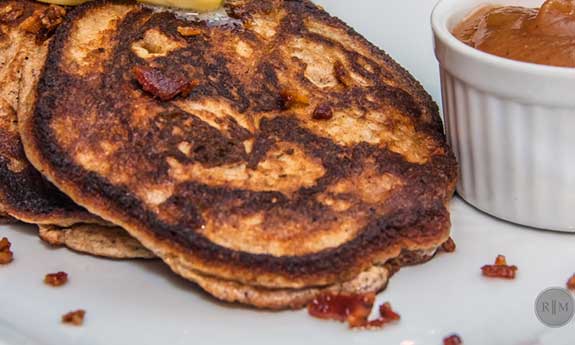 16. Banana Bacon Pancakes
Paleo cooks like to bacon things up, and these banana pancakes are a clear example of some bacon-doctoring going on. But notice that it’s not just ordinary, run-of-the-mill bacon, it’s nitrate free bacon, and they tell you to buy pastured bacon if you can get your hands on some. This is keeping with the Paleo philosophy that we should do our best to source our foods as naturally as possible, opting out of conventional farming and livestock methods whenever we can. All of the ingredients here are Paleo friendly, and you’ll likely enjoy the taste of bacon colliding with banana pancakes.

17. Coconut Banana Pancakes
We just had to include these amazing coconut banana pancakes because they do a great job of bringing both flavors to the palate in equal amounts. They use coconut flour of course, but also have you using coconut oil, and topping things off with coconut milk or coconut cream. The whole time they have you covered in the banana department with a pair of bananas mashed right into the batter. Take them up on the option to top this off with fresh strawberries, as it will give it that 5 star look and taste.