Did you know that there are several version of paleo banana bread you can make? No, really, there are! Many believe that by cutting out grains and wheat from your diet you’ll be giving up a staple of the American diet: bread. But as it turns out there’s plenty of ways to make bread without using the standard ingredients. It just takes a little creativity and a Paleo mindset and you’ll find that you can have many of your favorites, including paleo-friendly banana bread. 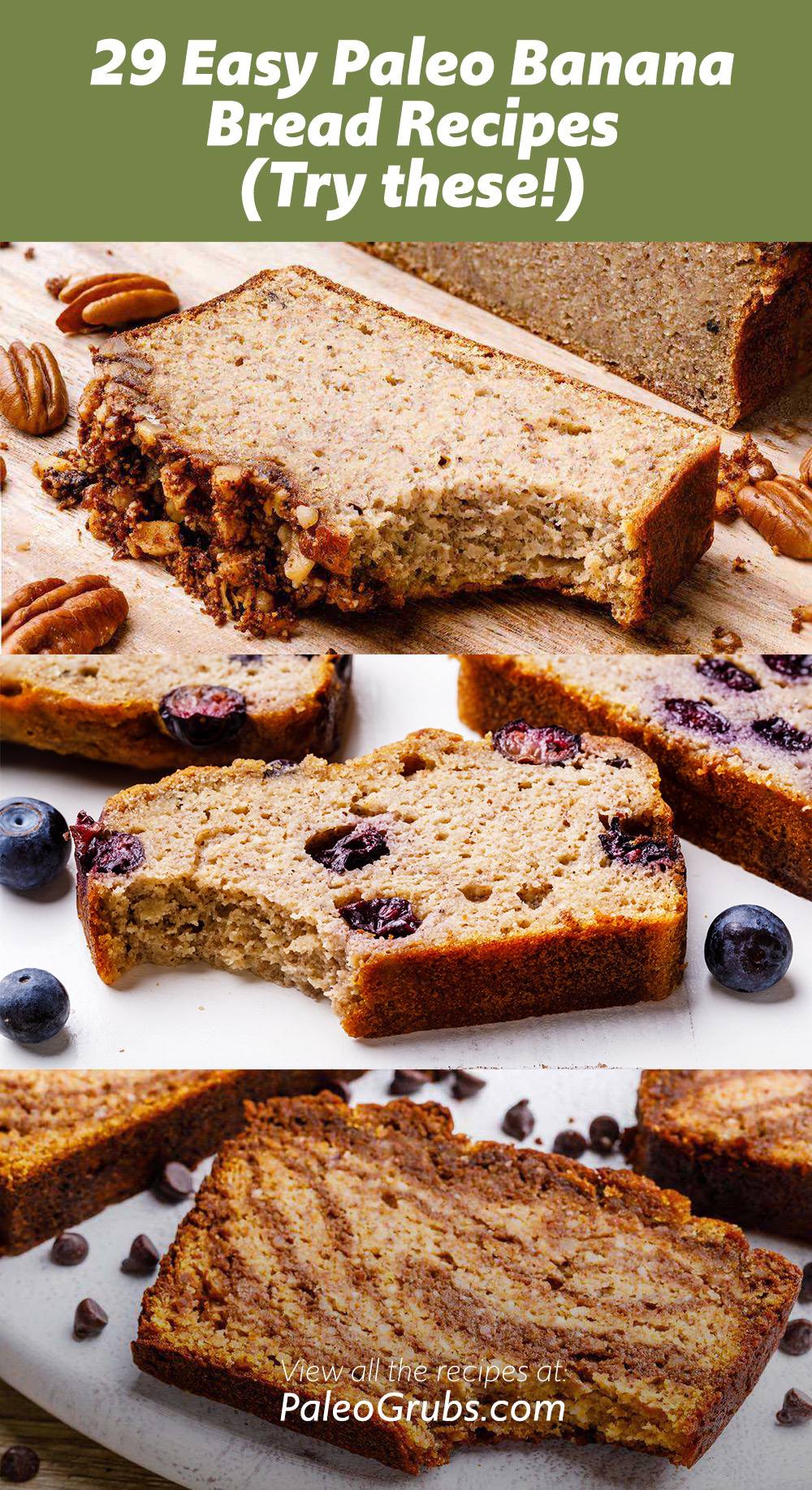 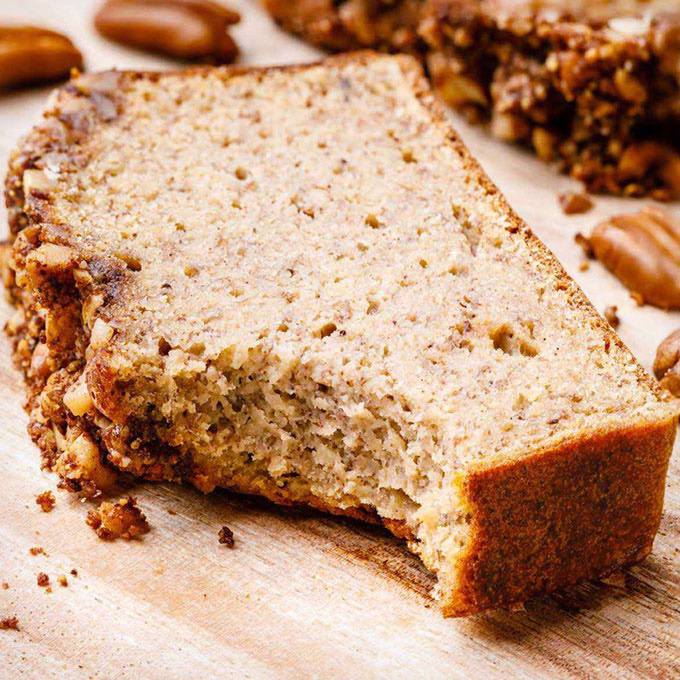 This coffee cake banana bread is just the right amount of sweet to go with your morning coffee, and breaking into the crunchy pecan and cinnamon crumble makes it even more decadent. 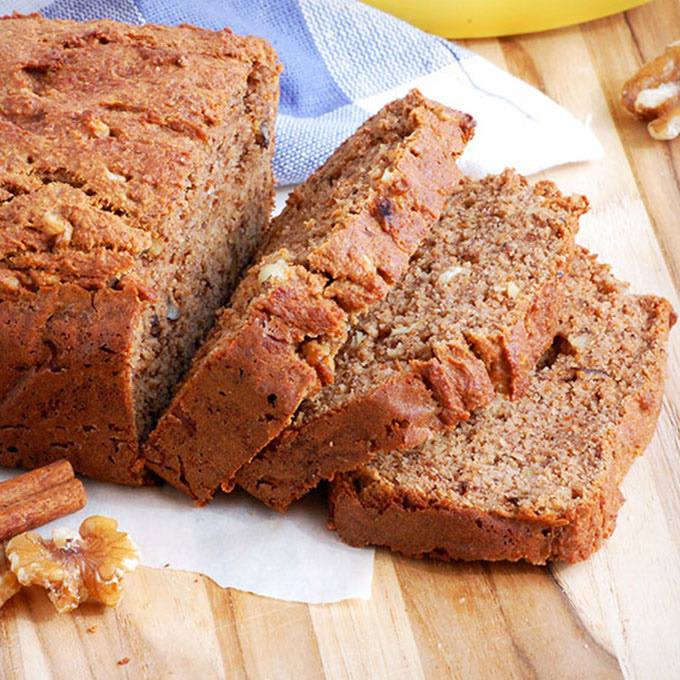 This basic banana bread recipe has been upgraded to include nutritious walnuts to add an extra crunch to this paleo idea for breakfast, brunch, or as an after dinner treat. 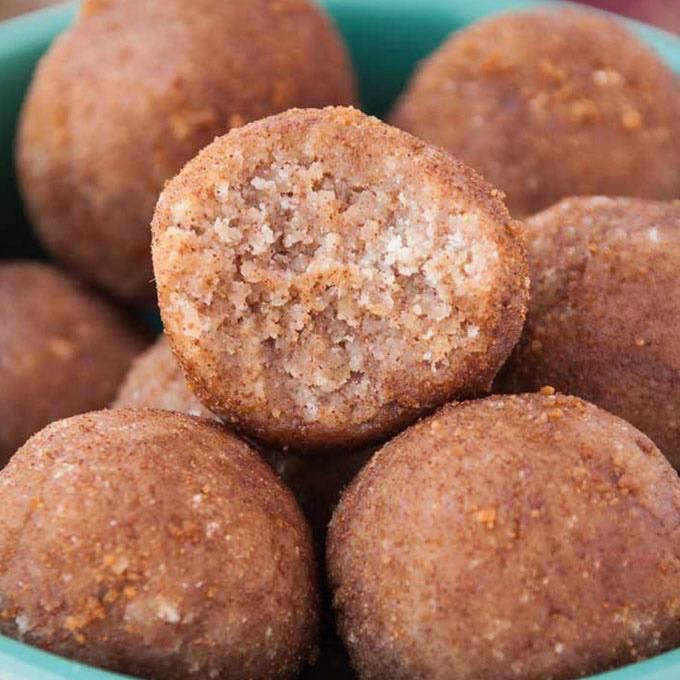 There’s no baking involved in this recipe, which means that you will be able to rustle up a batch of delicious banana cinnamon energy balls in a matter of minutes. 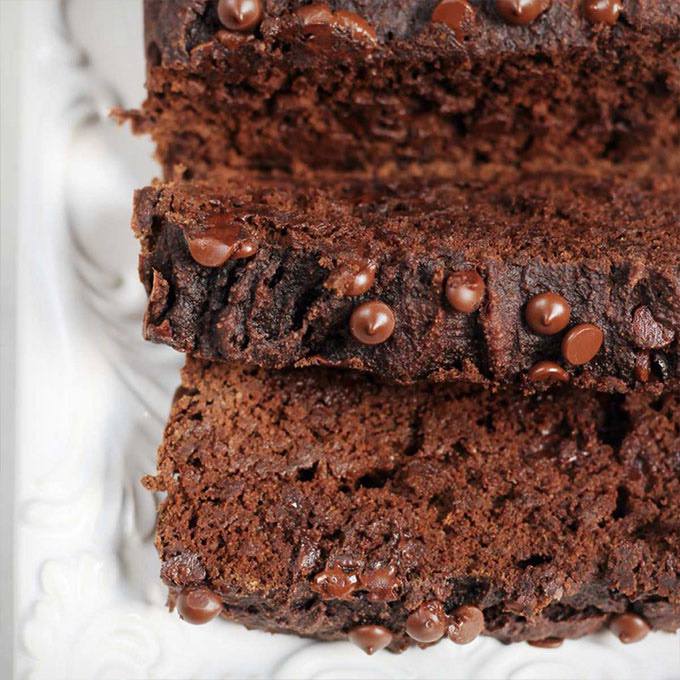 Is it a chocolate cake or a banana bread? Well, it’s a bit of both, because this paleo banana bread recipe uses both bananas and cacao powder to bake a rich, moist creation. 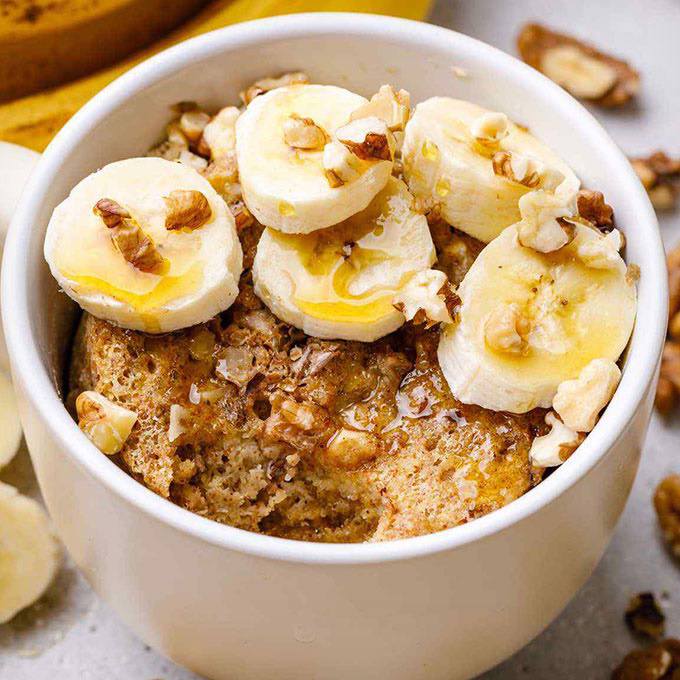 If you can resist anything but temptation, an entire banana bread loaf might be too much to bear, so make a single serving in a mug using paleo ingredients and your microwave. 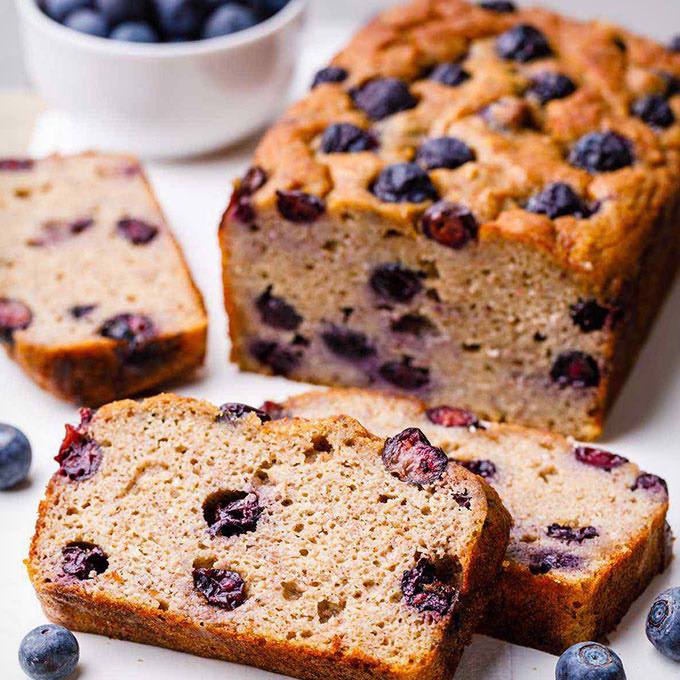 You don’t have to stop at bananas when you’re making banana bread – why not add other fruits too, like a cup of fresh and juicy blueberries for a boost of vitamin C. 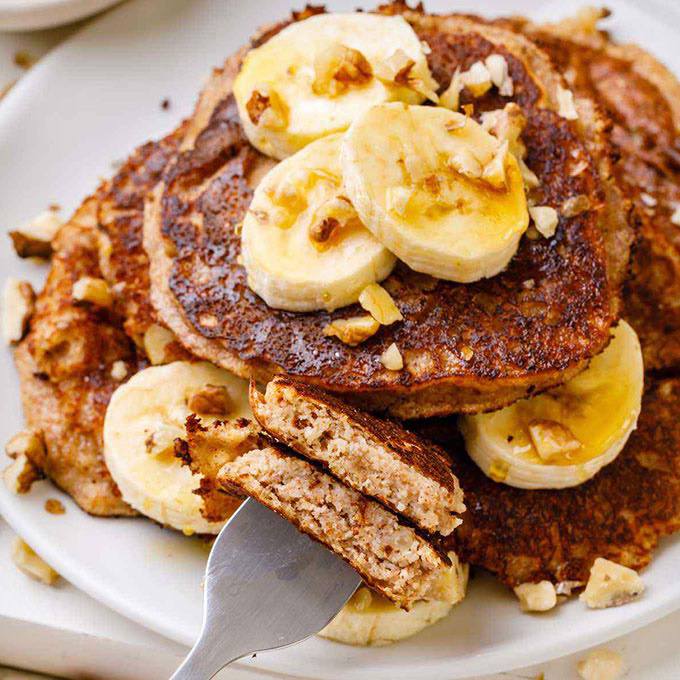 When you just can’t make your mind up between banana bread and pancakes, check out this recipe which combines the two into one delicious, filling, and fun breakfast recipe. 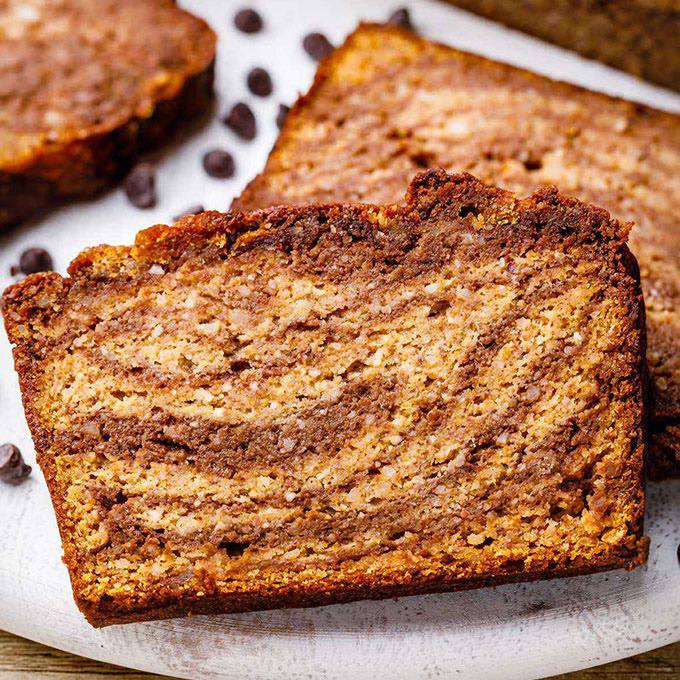 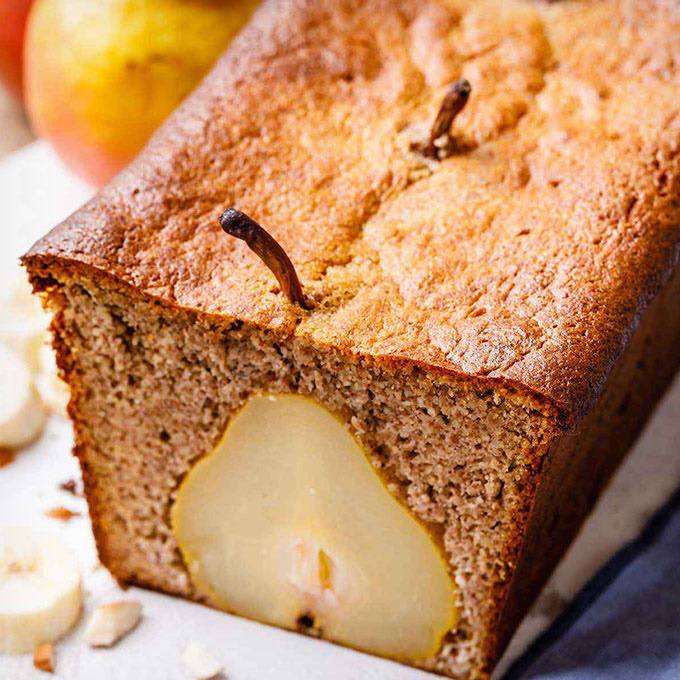 This is such a quirky way to make banana bread and it would be stunning when served to guests – cut into the moist bread and discover whole slices of delicious juicy pears. 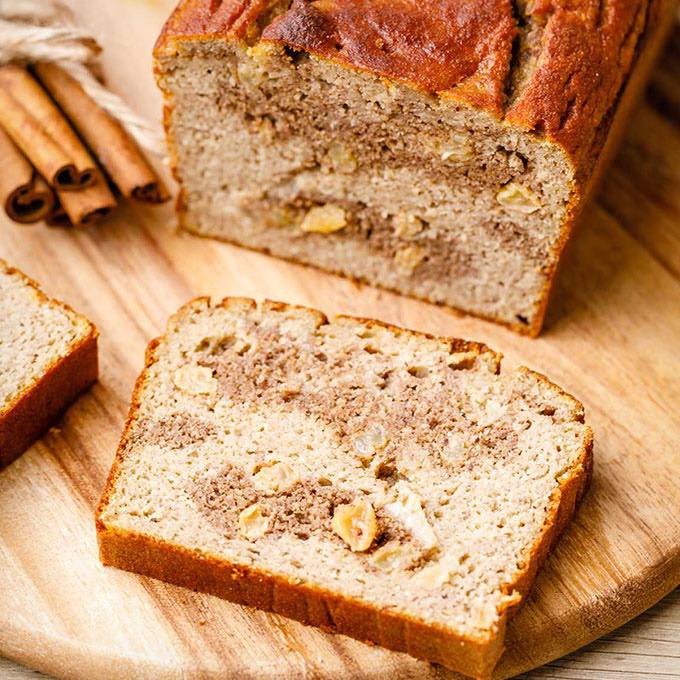 With a surprise in every bite, this banana bread hides a swirl of cinnamon raisin batter which runs throughout the loaf, giving a breakfast staple a whole new twist. 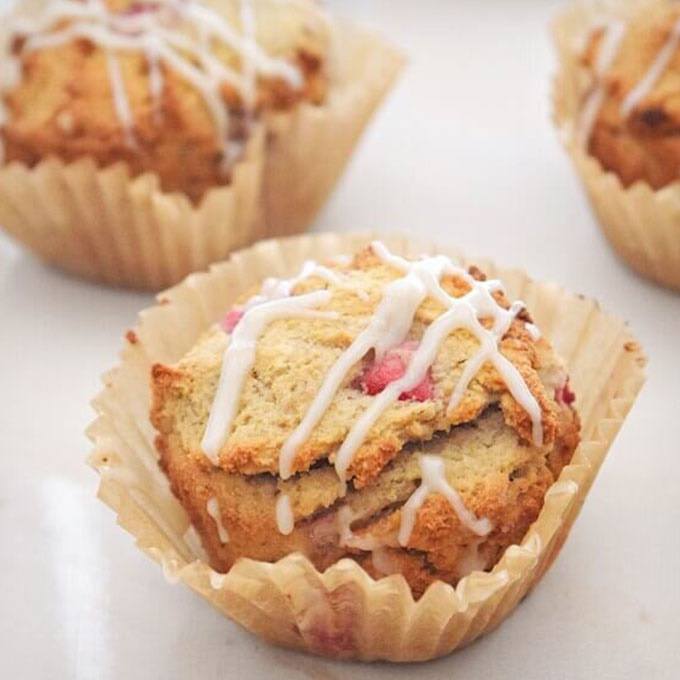 These paleo, gluten-free, dairy-free, and grain-free muffins make a substantial, sweet snack as they contain more coconut flour than usual to absorb all the delicious juices from the plump strawberries. 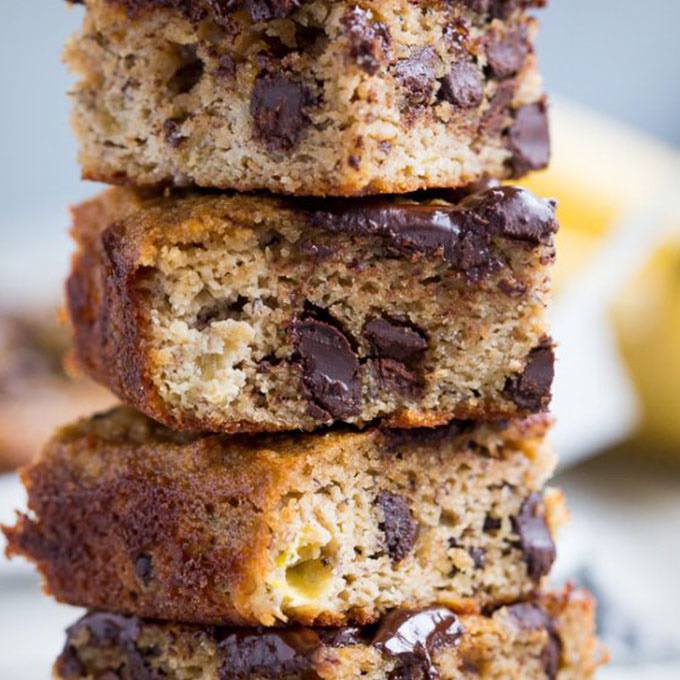 If you’re looking for more of a bar than a loaf, this recipe will make 16 delicious squares of banana bread which has been stuffed full of paleo friendly chocolate chips. 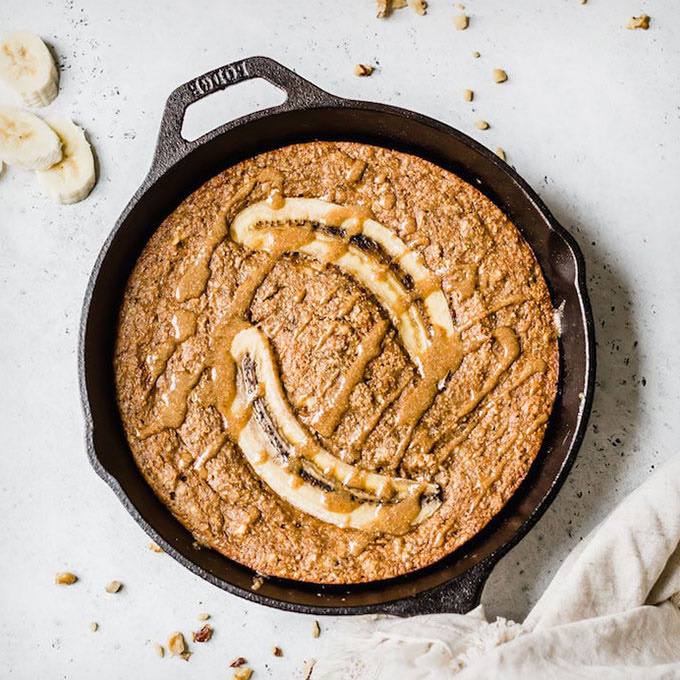 Making banana bread in a skillet is certainly a different method of baking, but with this recipe you will produce a deliciously moist and fruity bread with whole bananas nestled into the top. 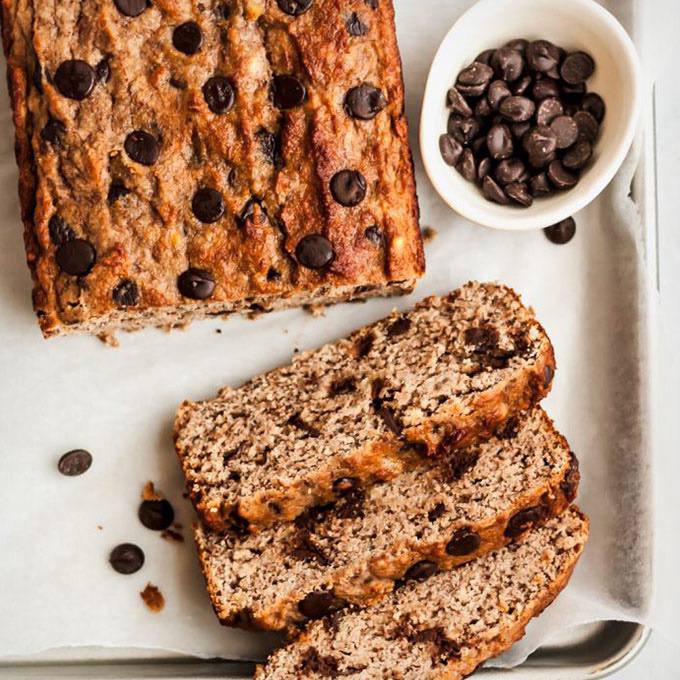 With no butter or refined sugars, chocolate chip banana bread is healthy, moist, and full of fresh banana and plenty of paleo friendly chocolate chips to make it seem naughtier than it is. 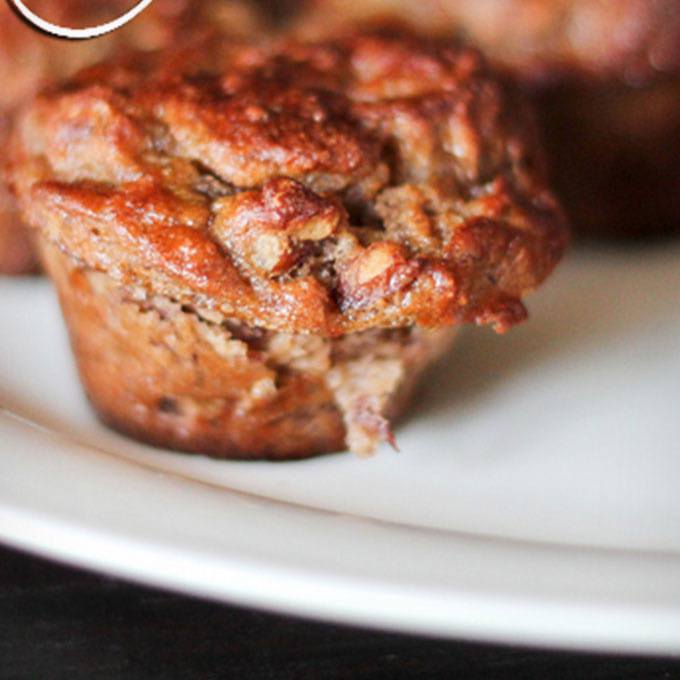 Now here’s a combination you would probably never think to put together – banana and garlic! Surprisingly tasty, the garlic tempers the sweetness of the fruit for a totally different taste. 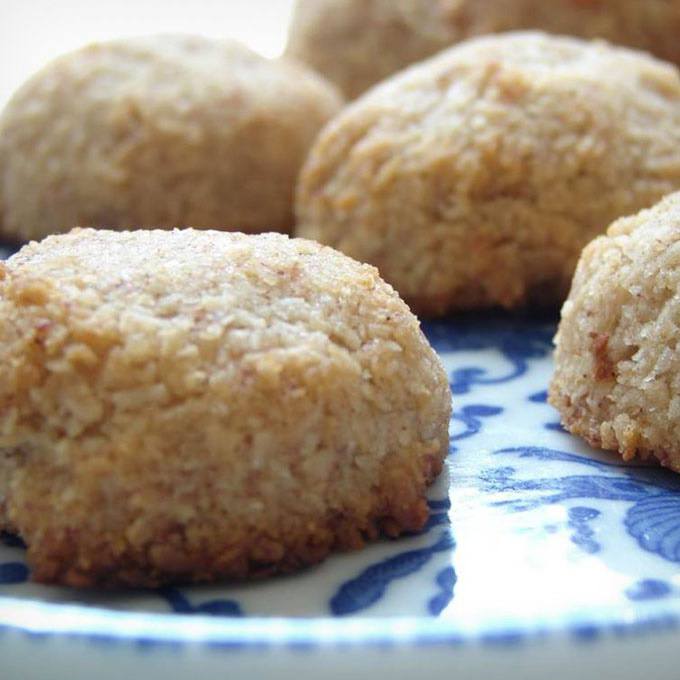 Grain, nut, dairy, and egg free, this recipe will suit just about anyone, and makes delicious macaroons which are great to grab and go, or packed into school or work lunches. 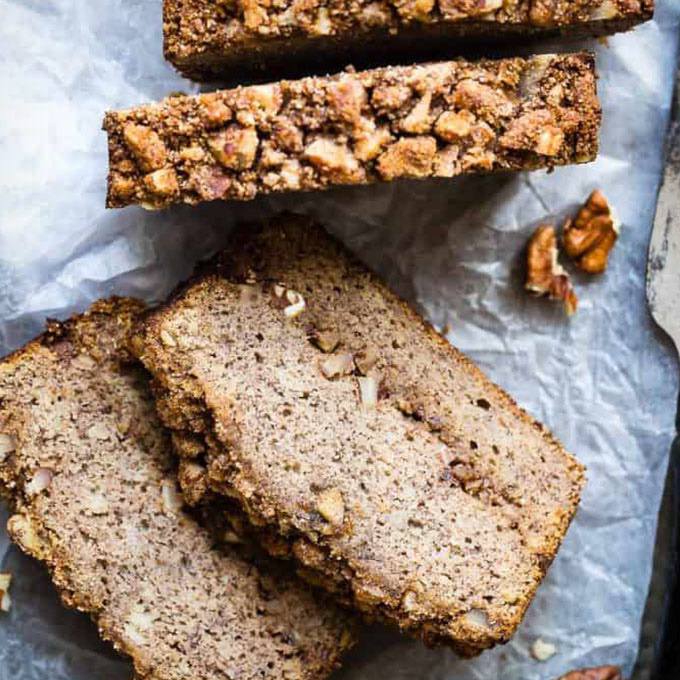 Made with coconut flour to keep it paleo-friendly, this banana bread recipe also includes a ripple of cinnamon pecan running through the loaf, AND a crunchy cinnamon pecan streusel topping. 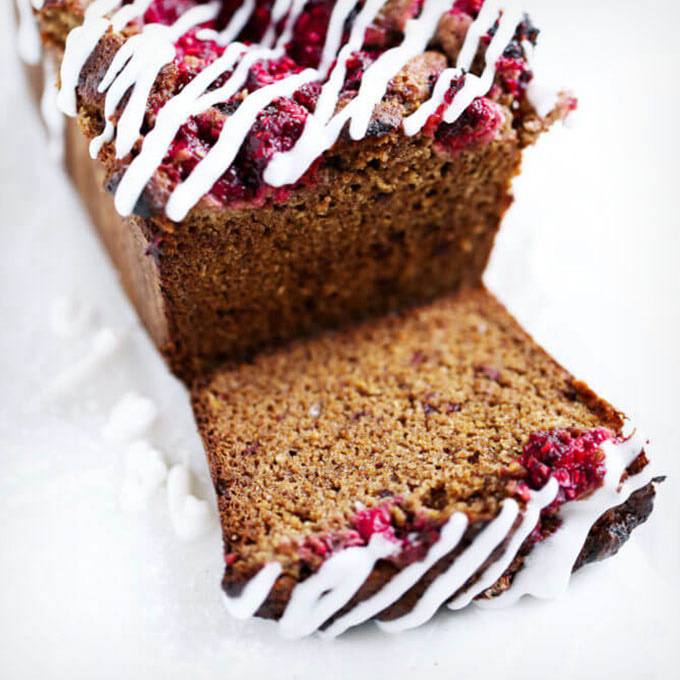 Banana bread might be delicious, but on its own it can look a little blah. Counteract the dullness by topping it with vibrant fresh raspberries and a coconut lemon drizzle. 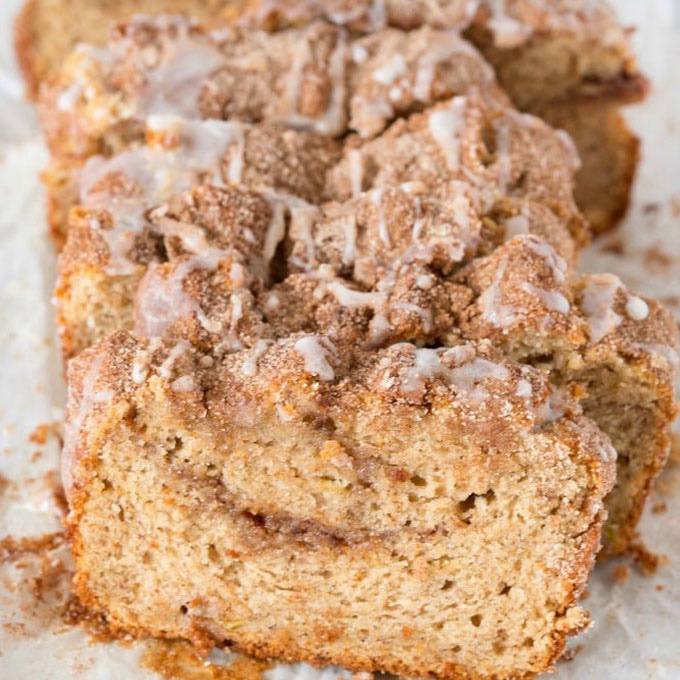 With no eggs and no sugar, this banana loaf is vegan, paleo, and gluten-free without losing any of the flavor of a classic recipe, and is sprinkled with a delectable cinnamon sugar topping. 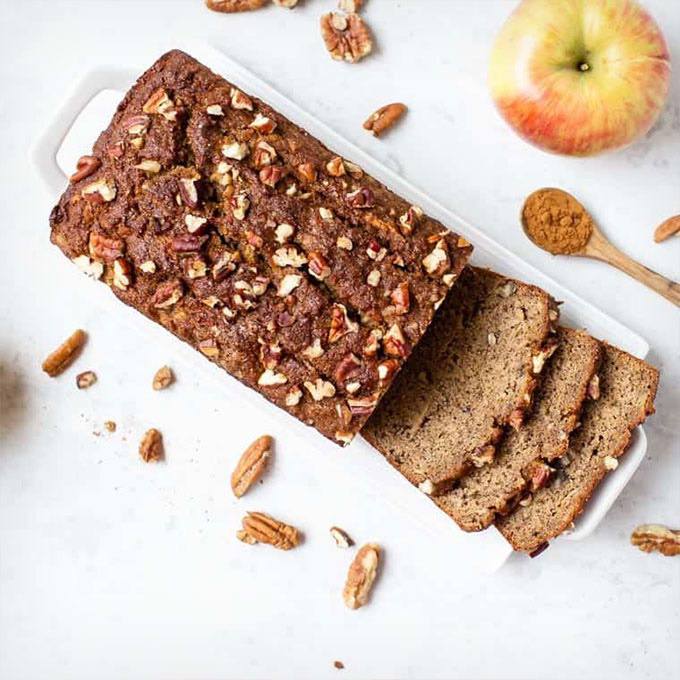 Brimming with healthy ingredients, this cinnamon apple bread uses three types of flour – including quinoa and coconut – for a fruity loaf which also contains pecans for a delicious nutty crunch. 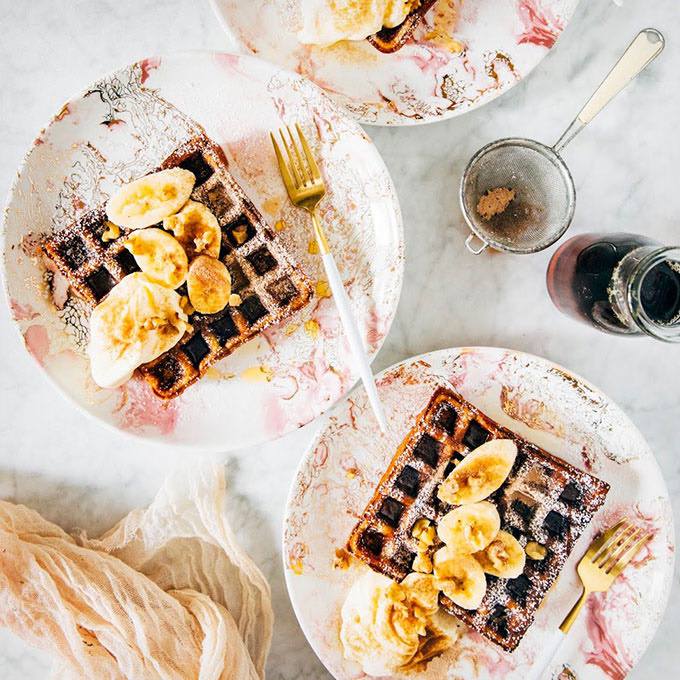 Given the choice between a slice of banana bread and thick, fluffy waffles for breakfast, which would you choose? If it’s the latter, follow this recipe which combines the two beautifully. 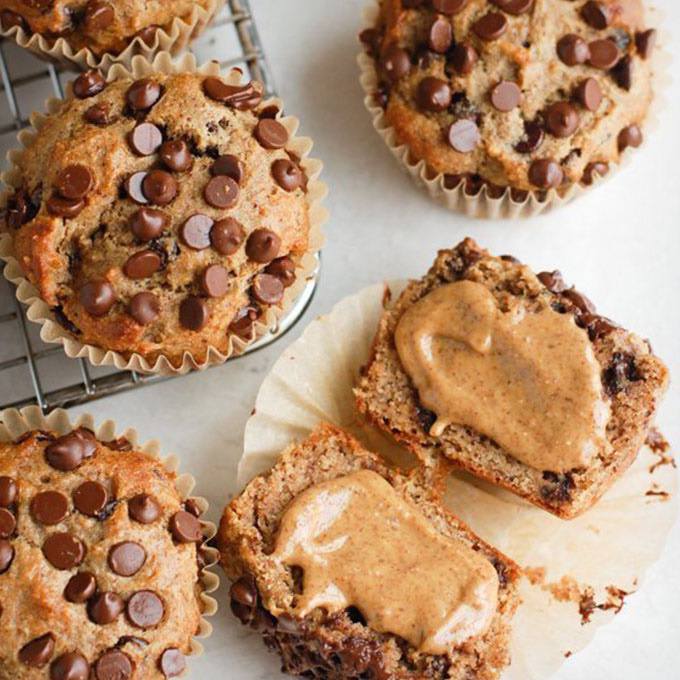 Muffins always seem more decadent than a slice of bread, even if it is banana bread. This recipe shows you how to bake this favorite treat (with chocolate chips) in the form of muffins muffins. 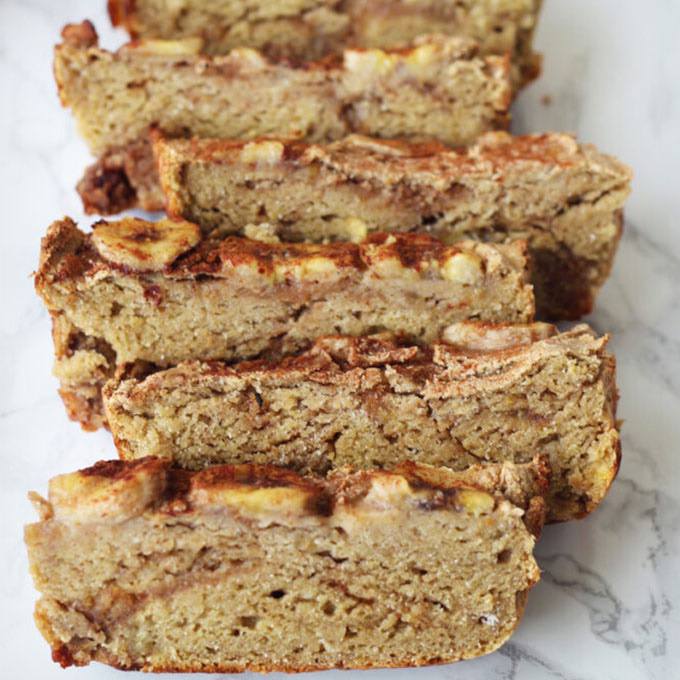 Using plantains instead of regular bananas gives a more starchy texture which means it holds up much better without eggs, while the cinnamon rounds it off with a lovely warming flavor. 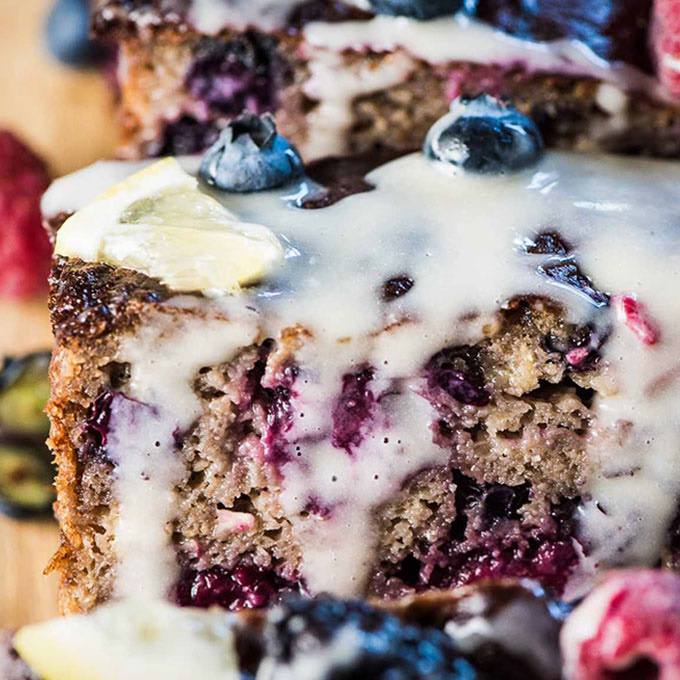 There is so much fruit in this recipe that you just know it’s good for you – bananas, raspberries, blueberries, and blackberries – and it’s finished off with a sweet lemon glaze. 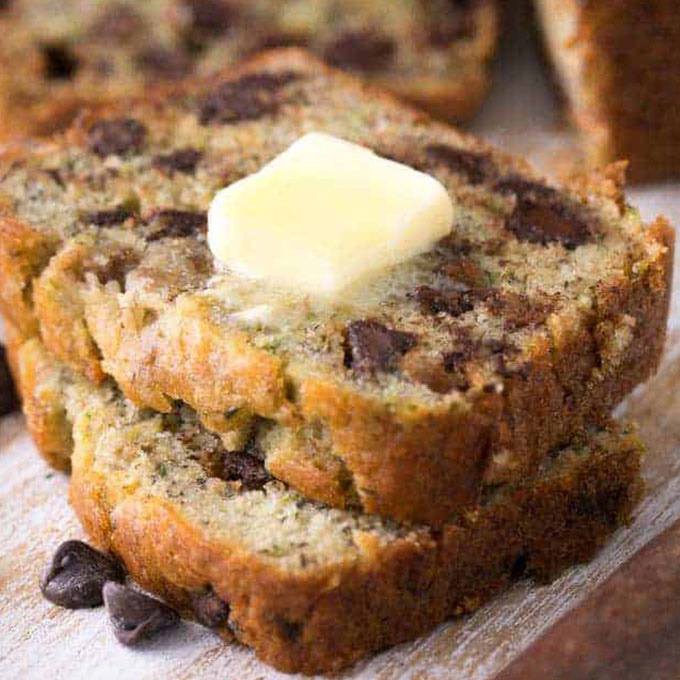 Zucchini might sound like a strange ingredient to use in a sweet loaf, but you can’t taste it and it adds an incredible moistness – try it out in this chocolate chip banana bread recipe. 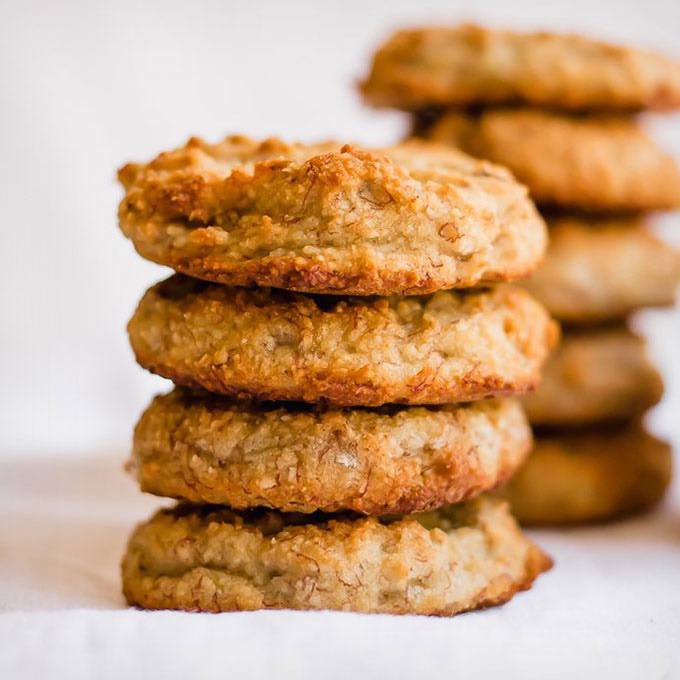 Vegan, paleo, and gluten-free, these yummy-looking banana bread cookies need only six ingredients, including delicious maple syrup and a touch of cinnamon to add a warming flavor to these unique little bites. 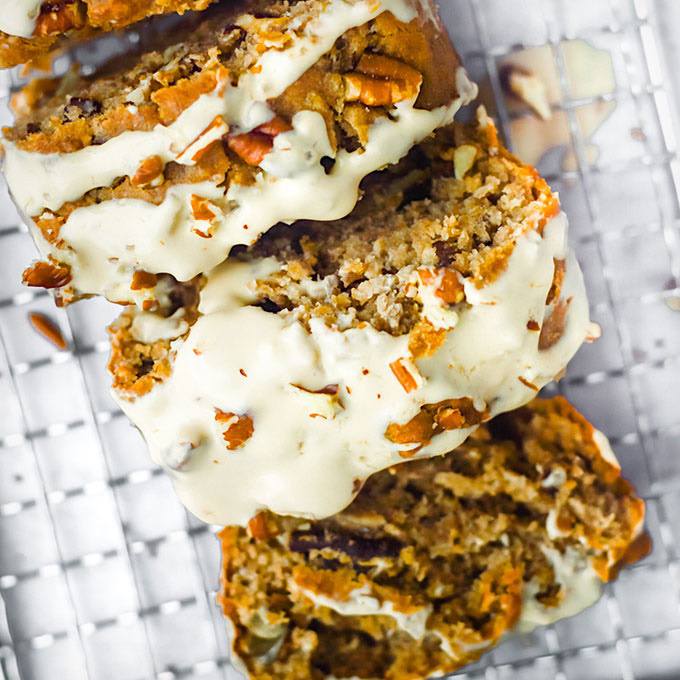 Chai spice is as much a part of fall as pumpkin spice, so mark the turn of the seasons with this chai spice paleo banana bread recipe using roasted bananas for a different taste. 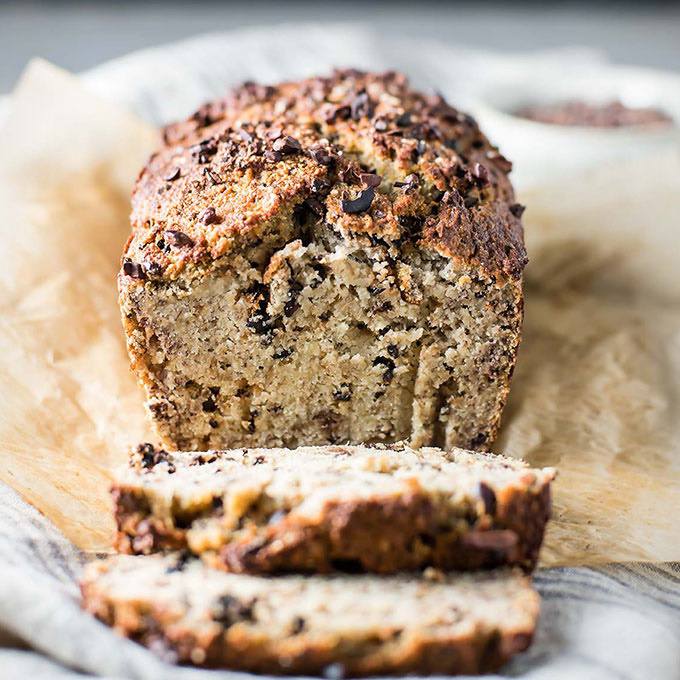 You can use bananas in their prime for this recipe rather than over-ripe by adding honey to ramp up the sweetness, or swap the cacao nibs for regular chocolate chips.