Salmon is often promoted on many diet plans as being a fish you should be adding to your menu more frequently. Loaded with omega-3s and protein it consistently ranks as one of the highest omega-3 foods out there. On Paleo salmon can be a good way to keep up your omega-3 intake, something you’ll want to be conscious of. Since salmon can be somewhat high in fat it’s good to keep your supplemental ingredients extra healthy so it remains a nutritious meal. The following all do a great job of providing you with a healthy baked salmon recipes you can eat a few times a week. 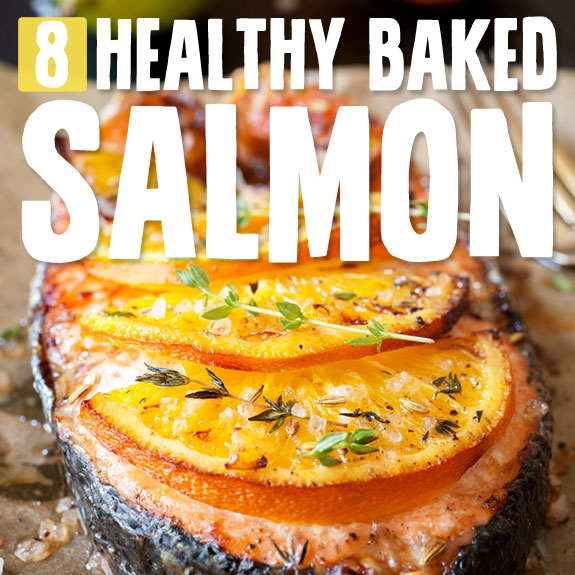 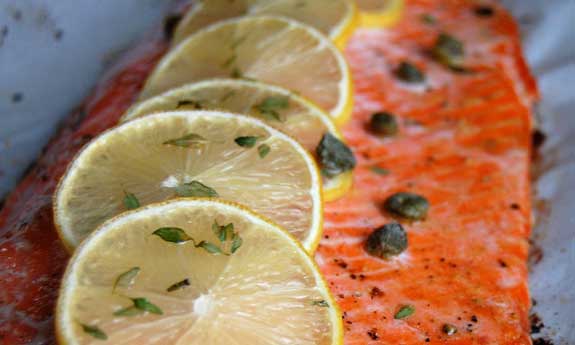 1. Baked Salmon with Lemon and Thyme
Let’s keep things simple with the first recipe on our list. Salmon has a robust flavor, but it can also easily get overshadowed by the ingredients you use while preparing it. Here Rebecca is using just lemons and thyme, with a few capers here and there for extra flavor. You don’t want to steal the show from the salmon, and it’s a good idea to leave well enough alone since salmon is already so healthy. It’s actually one of the most recommended fish when it comes to health, whether trying to avoid heart disease or trying to build lean muscle.

2. Baked Salmon with Thai Herb Crust
One way to make sure that your salmon has delicious flavor in every bite is to encrust it with seasonings and spices. In this recipe they’ve given it a Thai herb crust which consists of lemongrass, ginger, and a tamarind paste. The use of lemongrass is a very Thai-inspired idea, and is sure to give your salmon a new and fresh taste. The beauty of using herbs like these is that you aren’t adding any fat or calories to the equation, and you’re keeping this a nice healthy salmon dish that you can serve up any night of the week.

3. Mustard and Dill Crusted Salmon
This is another salmon recipe that is encrusting the salmon with tons of flavor to give it a boost on the taste buds. They’ve gone with mustard and dill as the two main flavor boosters, and there’s also some garlic powder used for good measure. As in most recipes you’ll see that you add salt and pepper to your liking, which will help round out the flavor of the fish while keeping it healthy. This is another simple recipe that shows you don’t have to go overboard when dealing with a fish like salmon, you just have to help it out a bit to make it pop. 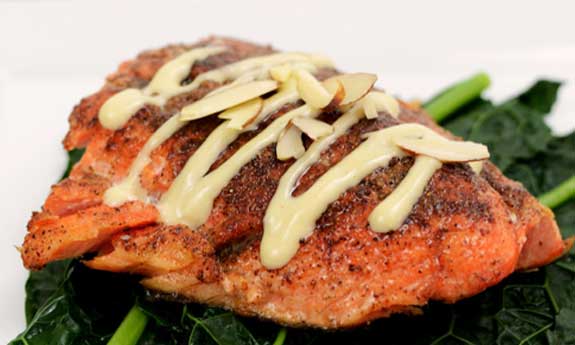 4. Five C Spiced Salmon
Here’s a clever way to remember which spices to put on the salmon, they all start with the letter c. Here’s the rundown: cardamom, cloves, cumin, coriander, and cinnamon. Any of these spices by themselves is a force to be reckoned with, so you know the flavor will be in high gear with this baked salmon. Many of these spices are listed on various superfood lists, so they’re providing more than just flavor in many instances, especially cumin, cinnamon, and cardamom. Salmon is already a superfood all by itself, so this really lays it on thick in regards to healthiness.

5. Deconstructed Stuffed Salmon
Stuffed salmon can be a bit hard to make, so they’ve done a good job of taking it apart and putting it back together again in a way that is easier and healthier. You get salmon and shrimp in one dish, not to mention a nice assortment of peripheral ingredients that increase the flavor without making it unhealthy. She mentions that you can use butter instead of lard, but we’d suggest using olive oil or ghee to keep this as healthy as possible, and fully Paleo.

6. Herb Crusted Salmon
This herb-crusted salmon recipe is sure to satisfy with a healthy herb crust made from coconut flour, parsley, and dijon mustard. You’re looking for items that are going to complement the salmon, and make the entire fillet something you want to eat. She’s included the instructions for making a nice salad for the salmon to go on, helping you to get your vegetable serving as well and making this a complete Paleo meal. We’d even suggest adding additional vegetables, since salmon is so rich in protein, with no fiber to speak of. 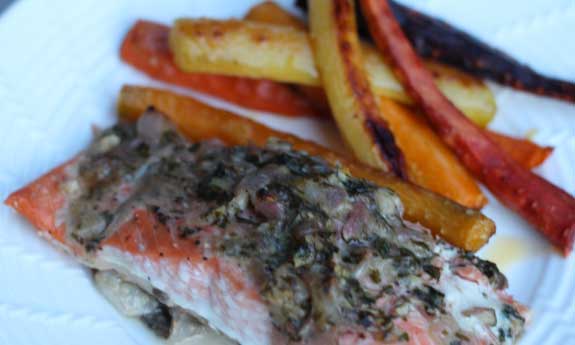 7. Salmon with Coconut Cream Sauce
Usually a cream sauce gets labeled as unhealthy, but on Paleo we know better, and as long as you’re using wholesome ingredients, you can have dishes like this and still be on the healthy side. The good news is that the coconut cream sauce adds a nice flavor to the dish, making you feel like you’re truly indulging, but without breaking any Paleo guidelines. Always be sure to eat your salmon with a good-sized portion of vegetables. This is part of the Paleo process, combining meat and vegetables as our ancestors would have. Here they’re showing it

8. Wild Salmon with Lemon Dill Sauce
The lemon dill sauce that you place on top of this wild salmon is what seals the deal and makes this a winner. The best part is it does it in a healthy way, using lemon zest, dill, and ghee for the sauce. Take their suggestion for garnishing this with lemon slices and sprigs of dill. Just because you’re eating like a caveman doesn’t mean you can’t class up the plate a bit. There’s a psychology to making your food look good, it makes it taste better in your mind, and means you’re more likely to stay on Paleo and get all of the healthy benefits that come along with it.