You can put anything on a slice of baked sweet potato and it looks like a fancy little hors d’oeuvres. But today I’m bringing you a restaurant favorite, done at home, the Paleo way: a baked blooming onion. 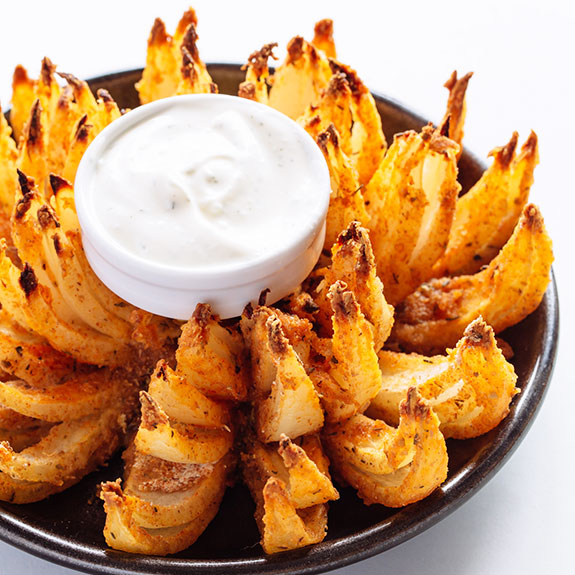 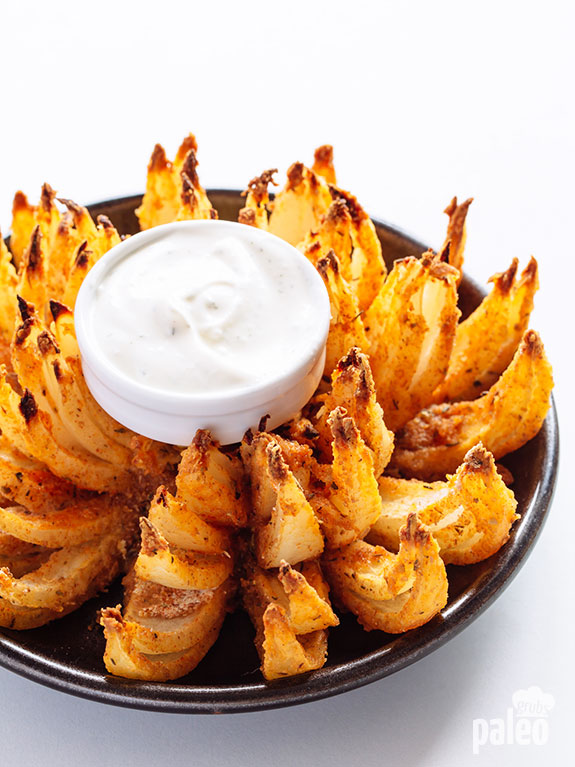 I love making fun snacks for get-togethers. Sure, there’s always your standard veggies and hummus – that’s easy-peasey. But I love having an assortment of finger foods that my friends will think are super yummy and even my non-Paleo friends will happily gobble up.

I remember the first time I saw a blooming onion as a kid. It was on TV – an ad for a popular restaurant chain – and I was blown away. (I was an easily impressed child, I guess.) They made an onion look so yummy and BIG. So years later, getting to make a Paleo version of this is tons of fun. 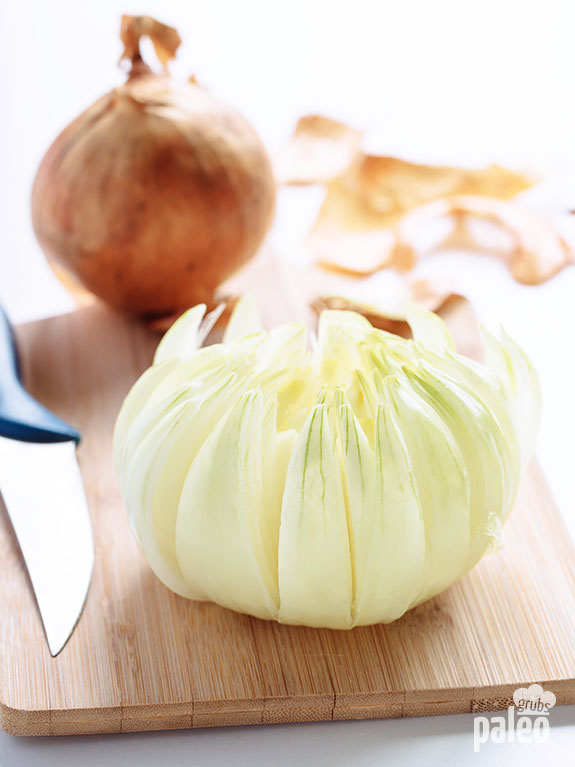 A blooming onion is all about the flavor. I recommend a yellow onion because it has a nice mellow, slightly sweet taste when it is baked. And get a big one! Go big or go home! Same goes for the flavor: it’s big flavor time! Spice it up with paprika, cayenne, and garlic, and then add some savory spices too and you’ve got a flavor bomb (in a good way!) on your hands.

If you like things really spicy, you can always add more cayenne or paprika to the mix, but don’t go overboard, especially if you’re serving this to guests. A little can go a long way. And if you’re wondering why we use both paprika and cayenne (they look the same…), let me explain…while they are both powders of red peppers, they are usually made from different types of red peppers and have slightly different flavors. 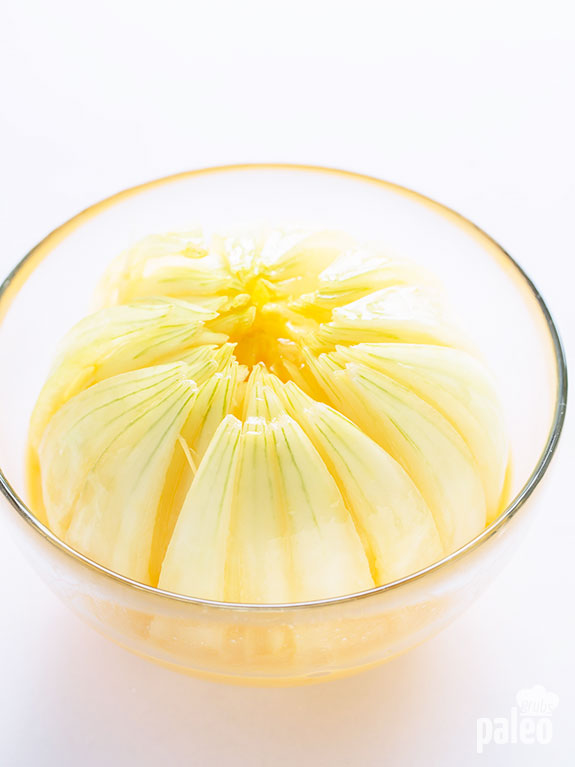 Paprika can be a little sweet and has varying degrees of spiciness. So before you decide to add more of these spicy spices, give them a little taste test first. 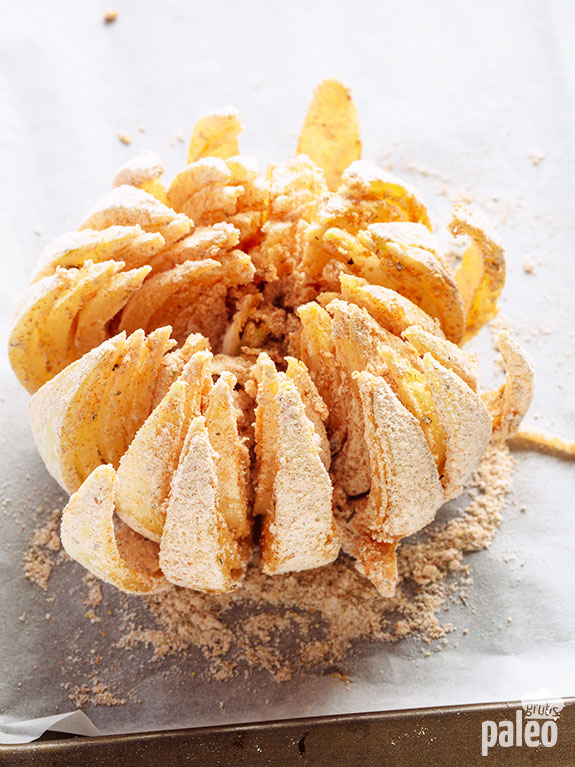 Secondly, blooming onions are often deep fried and we all know what that means: tons of fat! To cut way down on the fat content, instead of deep-frying, we bake our blooming onion. The result is the same: a soft, savory onion, covered in a crispy, flavorful, coating – but our version is close to nil on the fat counter. Yay! 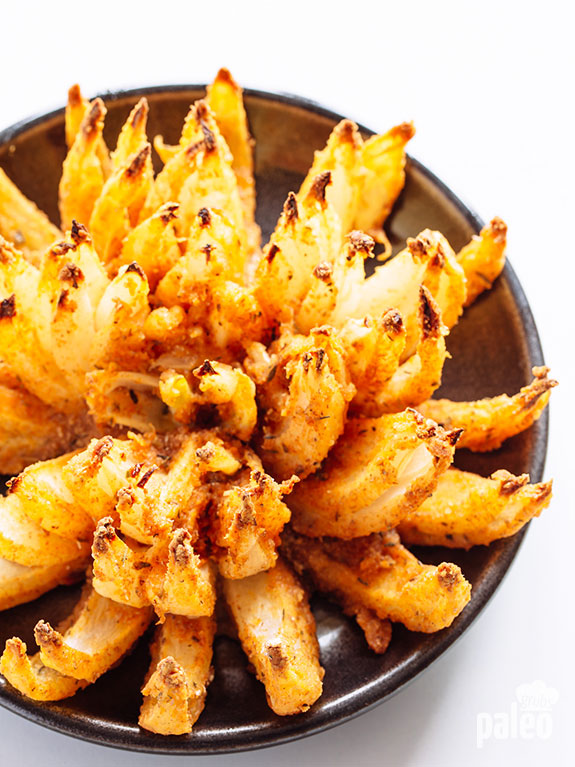 No blooming onion would be complete without a cool, creamy dip on the side. Not to fear! At the bottom of this recipe we’ve included a link to our Paleo ranch dressing recipe. It’s a must-have with your blooming onion.

Like I said, I love sharing my baked blooming onion with friends. Everyone loves foods to dip at gatherings and parties and this is just about the ultimate dippable food. So the next time you’re having friends over – movie night, anyone? – bake up one of these beautiful blooming onions and share the love!

( Make this next: Oven-Baked BBQ Ribs )