Asparagus is one vegetable you’ll want to work into your regular menu. It has plenty of health benefits, but what’s perhaps most important for a Paleo eater is its antioxidant content. Asparagus is a very detoxifying vegetable, and one that you don’t want to go without for too long. It also boasts an array of vitamins and minerals which are essential at keeping you feeling your best. The recipes below all help asparagus bring its A game so you get its full flavor along with other ingredients that make it taste even better. 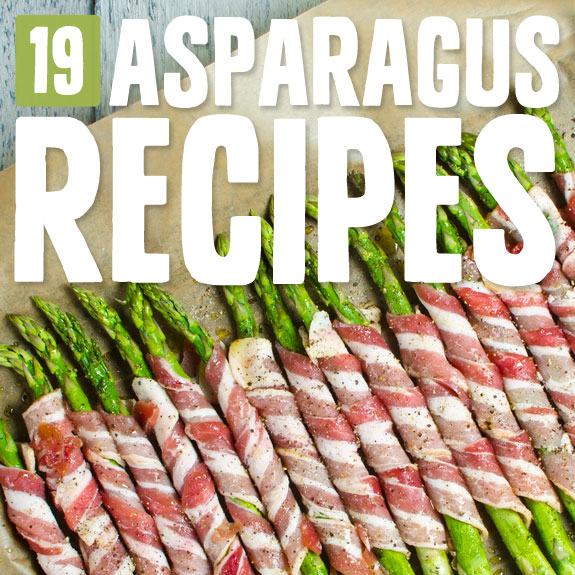 1. Asparagus Bundles with Bacon & Poached Eggs
This makes for a nice meal, and asparagus gets the starring role. The eggs and bacon are your source of meat, and the asparagus is your vegetable. Talk about a great start to your day that will have you feeling satisfied all the way through lunch. With other diet programs you end up eating just enough to hold you to your snack, but with Paleo it’s perfectly OK to fill up enough to get you all the way to your next meal. The asparagus will do a good job of soaking up the oils used, for a nice savory taste. 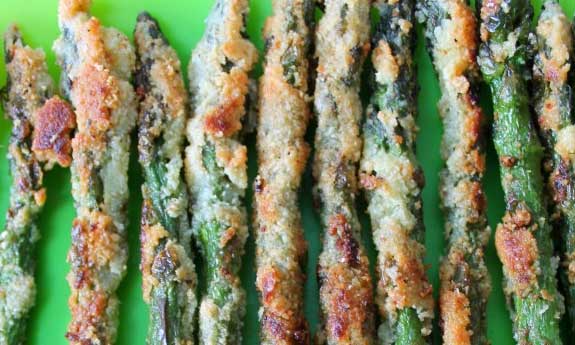 2. Crispy Asparagus Fries
You may miss French fries while on Paleo, it’s just something you can’t have, but there are several ways you can work within the guidelines to replace them. These asparagus fries aren’t going to convince you that you’re eating French fries, but they may be a good stand-in when you are wanting a crispy fry but want to stay true to your Paleo diet plans. The crispy coating on these fries is created by almond flour, so it remains grain-free, and they’re fried up in coconut oil, so they’ll have a rich, buttery flavor to them even though they aren’t deep-fried the way French fries are.

3. Asparagus and Mushrooms with Savory Blueberries
This is a nice mix of asparagus, mushrooms, and blueberries, and one that we’d never have thought of making. Blueberries do lend themselves to savoriness, just think of blueberry pancakes served with bacon or sausage. Here they take on a savory flavor because they are sauteed with onions in olive oil before being added to the asparagus and mushrooms. We think you’ll really enjoy the flavors that each ingredient brings to this salad, and the way they all work together in conjunction with the dressing. This makes a great side dish to any meaty entree.

4. Green Beans, Asparagus and Heartichoke Salad
One thing you’ll find about asparagus is that it plays well with others. In this recipe its companions are green beans and artichoke hearts, and this is one salad that aims at stealing the spotlight of whatever it is served with. One feature of this salad is the way it lends itself to a fancy presentation. The asparagus allows you to serve it stacked up, a la a fancy restaurant. It’s important to take the presentation of your food seriously, as it can go a long way in how you feel about the way it tastes. This salad intrinsically tastes good, but when you serve it up fancy like it tastes even better and you won’t feel like you’re dieting at all.

5. Prosciutto Wrapped Asparagus
Wrapping foods in prosciutto is a popular way of making them taste even better, and here asparagus gets the prosciutto-wrap treatment. Something about asparagus makes it a prime candidate to be paired with meat, which means it’s a vegetable you can snuggle up close to while doing Paleo, and it will never fail to deliver. Some vegetables are notorious for not being so tasty, but as long as you’re buying fresh, organic asparagus you shouldn’t have that problem, as it brings a nice flavor and serves as a good foundation for other ingredients, in this case prosciutto.

6. Sautéed Asparagus with Shallot and Lemon
Here’s a quick and easy asparagus recipe that won’t taste like it was quick and easy to make. There is a short list of ingredients, but you’ll find that it tastes bigger than it actually is. The main reason for this is that it’s sauteed in ghee, which gives it a rich, buttery taste. The tops of each stalk of asparagus are like little sponges, and they do a good job of soaking up the ghee and lemon juice so they’re practically bursting with flavor when you bite into them. 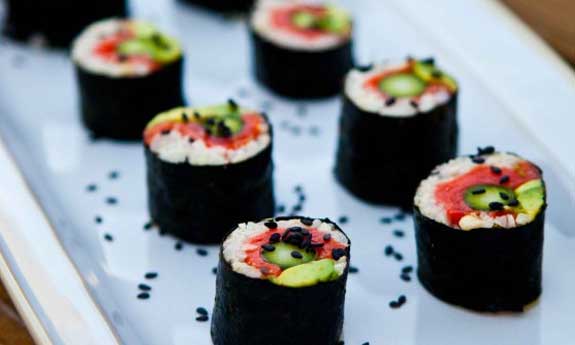 7. Salmon Asparagus Sushi Rolls
It’s amazing how many foods you can actually have while on Paleo. If you find yourself feeling like Paleo is restrictive, you’re not doing it right. These rice-free salmon asparagus sushi rolls are a fitting example of just how much is available while eating Paleo. Not only do these look great, but they taste great too, and are akin to what you’d find in an upscale sushi restaurant, only they don’t include rice, which is something that would be hard to find outside of your own kitchen. The rice is replaced with a jicama creation that you’ve got to try to believe.

9. Creamy Asparagus Soup
Making a soup based on asparagus is one way to get your vegetables, and warm up at the same time. Most diet plans would have you axing anything that starts with creamy, but on Paleo you can enjoy a creamy dish as long as it doesn’t use dairy. Here they’re using cashews and coconut milk to make this as creamy as can be, without using any actual dairy cream. Using cashews to make something creamy is something vegans have known for quite some time, and even though you may not associate a nut with being creamy, it does the job quite well.

10. Tahini Roasted Bacon-Wrapped Asparagus
Bacon is an approved Paleo meat, and as such factors in to many Paleo recipes. This is going to make sure that your asparagus is wrapped in a savory flavor, and the tahini is along for the ride, adding its own unique flavor to the mix. This makes for a flavorful side dish that threatens to steal the attention away from whatever you’re serving it with, or it can be used as an appetizer to a bigger meal. Whichever way you go with it, it’s sure to be a winner, and it’s so easy to put together you can whip it up whenever you have the required ingredients on hand.

11. Spring Greens Frittata
This is a nicely adjusted recipe that allows you to have a frittata that is loaded with spring greens, including asparagus. Having a good idea of which vegetables are in season, and eating those vegetables at they are harvested, is a good way of living in tune with nature, and more closely resembles the way our earliest ancestors would have lived. Eating the same vegetables all year long is a modern way of eating, and not as nature intended. It doesn’t take long to learn which vegetables are freshest when, you can also join a farming CSA program where you get a box of in-season vegetables are regular intervals. 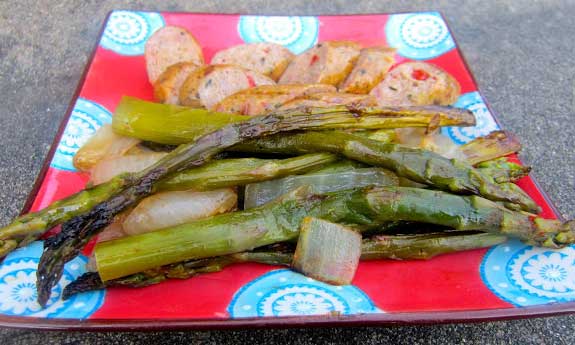 12. Asparagus on the Grill
Asparagus lends itself to being grilled, and takes on an awesome flavor. Knowing how to grill it properly will come in handy all summer long and provide you with the perfect vegetable to go with grilled chicken and steak. She’s not just throwing the asparagus on the grill, she’s mixing it up with onions, seasonings, and worcestershire sauce so it comes out tasting great and going well with your other grilled food. Rather than placing it directly on the grill she is opting to put it in foil so that it can cook up with the other ingredients and avoid getting scorched.

13. Citrusy Kick Asparagus
Asparagus has a way of getting infused with the flavor of the other ingredients you cook it with, and in this case it’s going to pop with the flavor of lemon and ginger. The lemon gives it the citrus flavor that goes so well with asparagus, and the kick is provided by the ginger. This is roasted in the oven, and doesn’t take long at all to prepare it or to cook it, so it’s a great last minute side dish to any meat you’re making. This showcases the way that seasonings have a way of sticking to the asparagus when cooked properly so every bite is flavorful.

14. Mushroom Pesto & Asparagus Flank Steak Roll
This flank steak comes with vegetables built right into it, both asparagus and mushrooms. The mushrooms are actually made into a pesto, which adds tons of flavor to the steak, without overpowering it. The trick about stuffing a steak is that you still want to be able to taste the natural flavor of the beef while giving it a boost. The mushroom pesto recipe alone is worth checking out, and when combined with the asparagus gives you a host of different textures all in one.

15. Nori Wrapped Smoked Salmon & Asparagus
If you want to serve up an appetizer to your guests that is sure to wow them, these are the ones to go with. It’s fancy, but really easy to make, and a pleasure to eat. The smoked salmon goes nicely with the asparagus, and has such a different mouthfeel that it is at the very least interesting to eat. Wrapping it up with a little nori gives it the feeling of sushi, and if you want it to be even fancier you can serve it with caviar.

16. Savory Asparagus Flan
Making a flan with asparagus is not typical, but this is a savory flan, not a sweet flan, and is better suited for a lunch or dinner than a dessert. Going Paleo means getting creative and trying new dishes, and this is one that we think you’ll really like if you try it. Because of all the sugar and dairy in a traditional flan, you’ll want to avoid anything you see on a restaurant menu. Make your own with this recipe and you’ll be replacing the dairy with coconut milk, and the sugar gets the boot because this is a savory flan. 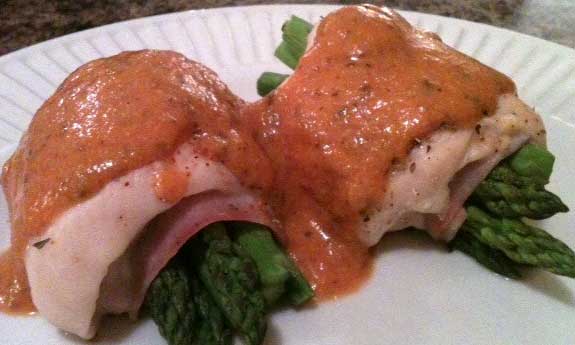 17. Chicken Asparagus Roulade
Chicken and asparagus pair well together and this recipe has them rolled up in a nice yin-yang of deliciousness. Adding to the flavor is slices of ham, so this is practically jumping off the page with flavor. As if it wasn’t enough, they’ve topped the lot with a creamy tomato sauce that doesn’t have any cream to speak of. It’s made with tomato, pumpkin, and coconut milk, and is the perfect finisher to this incredible dish.

18. Simple Red Cabbage Casserole
We like when they keep the recipe simple because simplicity is something that our Paleolithic brethren would have naturally followed. This casserole makes a great accompaniment to any meaty entree, and because you can make a lot of it just as easily as a little, it is great for serving up a group, or for leftovers so you don’t continually have to make a vegetable side dish. Tons of veggies here, including organic asparagus. Cabbage is one vegetable that goes well with asparagus, and the two deliver a one-two punch of nutrition.

19. Scallops and Asparagus
This is a basic dish that’s been made to look delectable because of the way they’ve arranged the asparagus. Make full use of the spear structure of the asparagus whenever you are plating it up and your meal will taste even better. For example, they are arranging them in a star form here, and nestling the scallops in the middle of the star. The scallops are the real show stopper here, and their tenderness is juxtaposed by the texture of the asparagus. Looks good, tastes good, and is not too hard to make. Bonus!