You don’t have to give up sweet things on Paleo, and these apple crisp recipes will make you a believer that you can actually eat delicious foods and still be technically dieting. Traditional apple crisp is loaded with all-purpose flour and tons of sugar, both white and brown. These apple crisp recipes lose the flour, lose the sugar, but keep the awesome apple flavor and still make it crisp and crunchy and syrupy so you will be in apple crisp bliss but still following Paleo. 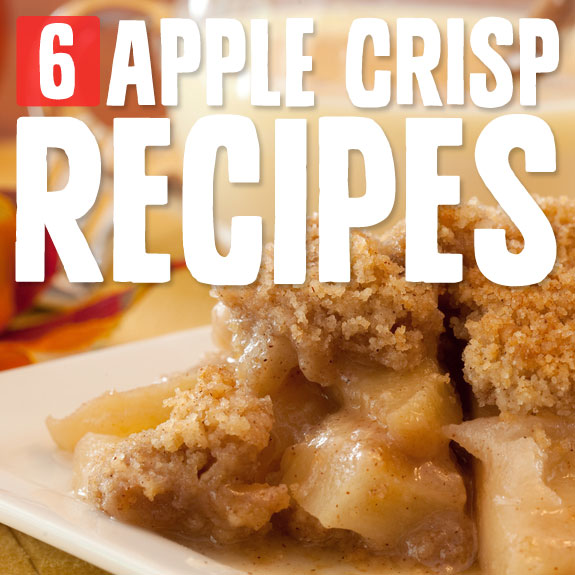 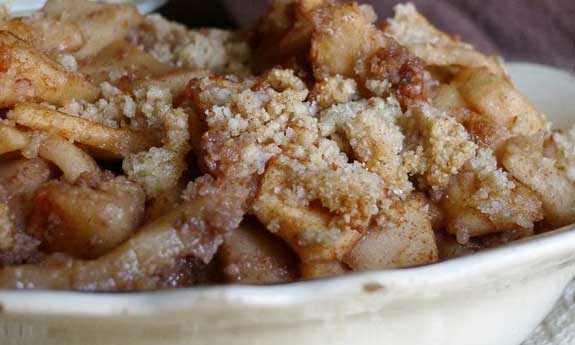 Photo: In The Kitchen with Amy Jo

1. Baked Apple Crisp
Baking apple crisp is one way to make it healthier for you, and this version uses ingredients that are totally in line with the Paleo way of eating. Apples, orange juice, and honey give it just the right amount of sweetness, and the crumble topping is made from almond flour and pecans so it will be crunchy but without the need for any grains. This means you’re getting all of the classic tastes and textures, but without anything in it that will set you back on your dieting plans. It’s great to realize that you just need to find ways to make your favorites, rather than to give them up.

2. Coconut Apple Cranberry Crisp
This apple crisp has a lot going on, and you’re sure to find something you like about it since it has coconut and cranberry flavors in addition to the apple. Fruit is not a major component of the Paleo diet, but it does have a place in your daily lineup, and this is one dessert that meets that requirement. The coconut flavor comes from coconut flour, coconut oil, and shredded coconut, so if you don’t like coconut you might want to move on to another recipe. The cranberries they’re using can be either fresh or frozen, so if you find it easier to keep frozen foods on hand, use those kind.

3. Slow Cooker Apple Crisp
Slow cookers are great because they allow you to toss everything in and let it cook itself. The end result here is that you end up with a delicious apple crisp without having to babysit it or wonder if it’s going to come out alright. The ingredients list is very basic, and includes the apples of course, and almonds, coconut, cinnamon, honey, and butter, so it’s easy enough to see that this is a Paleo dessert all the way. The more you cook Paleo foods the more you’ll become familiar with what is allowed and what isn’t, and how to substitute Paleo friendly items for unhealthy ones. 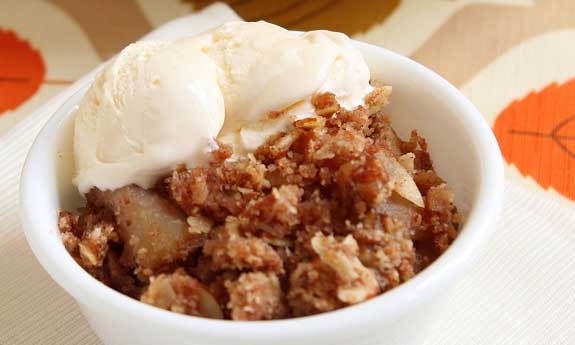 Photo: Living Low Carb… One Day at a Time

4. Low Carb “Apple” Crisp
This apple crisp doesn’t use any apples at all, but still manages to pull off the switcheroo using chayote squash. This provides the texture and mouthfeel of apples, and the other ingredients are able to get the flavor right. The reason she’s done away with the apples is because they’re high in carbs. Remember, we’re not counting carbs or calories, or anything else on Paleo, so you shouldn’t try this recipe because of its lower carb count, but rather because it will show you that there are many ways to make foods without using the main ingredients.

5. Paleo Apple Crisp
Here’s an apple crisp that’s Paleo all the way. It’s always good to follow chefs that are totally committed to using Paleo ingredients, and that know what they can use and what they can’t. You can see that she’s going out of her way to use very wholesome and natural items because she’s recommending that you use raw honey that is from a local source. This will be the best way to mimic the kind of ingredients they were using thousands of years ago. Of course there’s no way to know what they were eating, or to replicate exactly the diet they had, but we do the best we can within our modern world to take a step back.

6. Paleo Apple Pear Crisp
By adding a little bit of pear to the equation they’ve given this apple crisp a new dynamic. It’s now enhanced by the flavor and the texture of the pear, but it retains its apple crisp nature. They’ve done a good job of showing you how to make this so it’s already portioned off into individual sized servings. Paleo is about getting back to a natural way of eating, and part of that is learning to control food rather than having food control you. Viewing food as a source of fuel to get you through the day is a key concept to having success with Paleo. Make sure your portion sizes aren’t slowing you down.